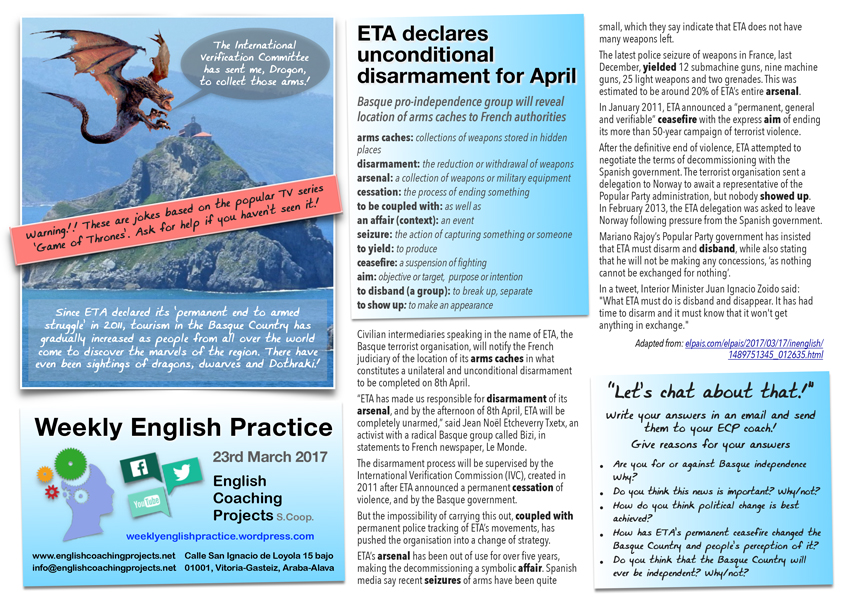 disarmament: the reduction or withdrawal of weapons

arsenal: a collection of weapons or military equipment

cessation: the process of ending something

to be coupled with: as well as

an affair (context): an event

seizure: the action of capturing something or someone

to yield: to produce

ceasefire: a suspension of fighting

to disband (a group): to break up, separate

to show up: to make an appearance

Civilian intermediaries speaking in the name of ETA, the Basque terrorist organisation, will notify the French judiciary of the location of its arms caches in what constitutes a unilateral and unconditional disarmament to be completed on 8th April.

“ETA has made us responsible for disarmament of its arsenal, and by the afternoon of 8th April, ETA will be completely unarmed,” said Jean Noël Etcheverry Txetx, an activist with a radical Basque group called Bizi, in statements to French newspaper, Le Monde.

The disarmament process will be supervised by the International Verification Commission (IVC), created in 2011 after ETA announced a permanent cessation of violence, and by the Basque government.

But the impossibility of carrying this out, coupled with permanent police tracking of ETA’s movements, has pushed the organisation into a change of strategy.

ETA’s arsenal has been out of use for over five years, making the decommissioning a symbolic affair. Spanish media say recent seizures of arms have been quite small, which they say indicate that ETA does not have many weapons left.

The latest police seizure of weapons in France, last December, yielded 12 submachine guns, nine machine guns, 25 light weapons and two grenades. This was estimated to be around 20% of ETA’s entire arsenal.

In January 2011, ETA announced a “permanent, general and verifiable” ceasefire with the express aim of ending its more than 50-year campaign of terrorist violence.

After the definitive end of violence, ETA attempted to negotiate the terms of decommissioning with the Spanish government. The terrorist organisation sent a delegation to Norway to await a representative of the Popular Party administration, but nobody showed up.
In February 2013, the ETA delegation was asked to leave Norway following pressure from the Spanish government.

Mariano Rajoy’s Popular Party government has insisted that ETA must disarm and disband, while also stating that he will not be making any concessions, ‘as nothing cannot be exchanged for nothing’.

In a tweet, Interior Minister Juan Ignacio Zoido said: “What ETA must do is disband and disappear. It has had time to disarm and it must know that it won’t get anything in exchange.”