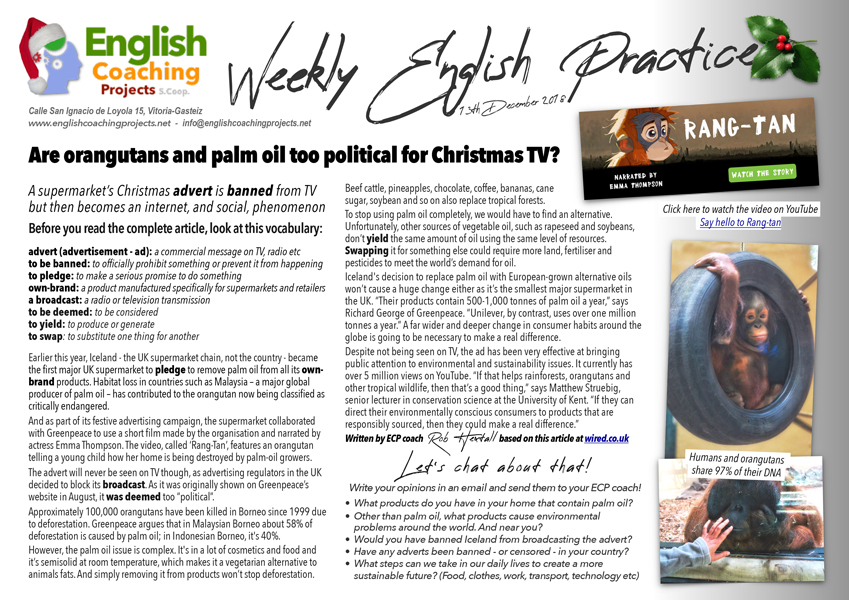 ECP coach Rob explains why Iceland – the UK supermarket chain, not the country – has had problems with its 2018 Christmas TV advert about s young orangutan and plam oil.

Are orangutans and palm oil too political for Christmas TV?

A supermarket’s Christmas advert is banned from TV but then becomes an internet, and social, phenomenon

Before you read and listen to the complete article, look at this vocabulary:

to be banned: to officially prohibit something or prevent it from happening

to pledge: to make a serious promise to do something

own-brand: a product manufactured specifically for supermarkets and retailers

a broadcast: a radio or television transmission

to be deemed: to be considered

to yield: to produce or generate

to swap: to substitute one thing for another

Earlier this year, Iceland – the UK supermarket chain, not the country – became the first major UK supermarket to pledge to remove palm oil from all its own-brand products. Habitat loss in countries such as Malaysia – a major global producer of palm oil – has contributed to the orangutan now being classified as critically endangered.

And as part of its festive advertising campaign, the supermarket collaborated with Greenpeace to use a short film made by the organisation and narrated by actress Emma Thompson. The video, called ‘Rang-Tan’, features an orangutan telling a young child how her home is being destroyed by palm-oil growers.

The advert will never be seen on TV though, as advertising regulators in the UK decided to block its broadcast. As it was originally shown on Greenpeace’s website in August, it was deemed too “political”.

Approximately 100,000 orangutans have been killed in Borneo since 1999 due to deforestation. Greenpeace argues that in Malaysian Borneo about 58% of deforestation is caused by palm oil; in Indonesian Borneo, it’s 40%.

However, the palm oil issue is complex. It’s in a lot of cosmetics and food and it’s semisolid at room temperature, which makes it a vegetarian alternative to animals fats. And simply removing it from products won’t stop deforestation. Beef cattle, pineapples, chocolate, coffee, bananas, cane sugar, soybean and so on also replace tropical forests.

To stop using palm oil completely, we would have to find an alternative. Unfortunately, other sources of vegetable oil, such as rapeseed and soybeans, don’t yield the same amount of oil using the same level of resources. Swapping it for something else could require more land, fertiliser and pesticides to meet the world’s demand for oil.

Iceland’s decision to replace palm oil with European-grown alternative oils won’t cause a huge change either as it’s the smallest major supermarket in the UK. “Their products contain 500-1,000 tonnes of palm oil a year,” says Richard George of Greenpeace. “Unilever, by contrast, uses over one million tonnes a year.” A far wider and deeper change in consumer habits around the globe is going to be necessary to make a real difference.

Despite not being seen on TV, the ad has been very effective at bringing public attention to environmental and sustainability issues. It currently has over 5 million views on YouTube. “If that helps rainforests, orangutans and other tropical wildlife, then that’s a good thing,” says Matthew Struebig, senior lecturer in conservation science at the University of Kent. “If they can direct their environmentally conscious consumers to products that are responsibly sourced, then they could make a real difference.”

Written by ECP coach Rob Hextall based on this article at wired.co.uk