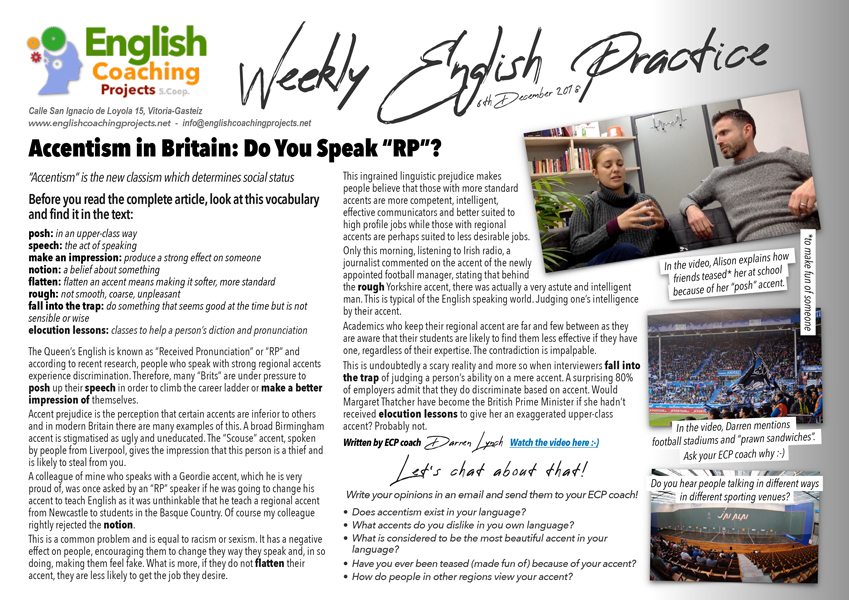 “Accentism” is the new classism which determines social status

posh: in an upper-class way

speech: the act of speaking

make an impression: produce a strong effect on someone

notion: a belief about something

fall into the trap: do something that seems good at the time but is not sensible or wise

elocution lessons: classes to help a person’s diction and pronunciation

The Queen’s English is known as “Received Pronunciation” or “RP” and according to recent research, people who speak with strong regional accents experience discrimination. Therefore, many “Brits” are under pressure to posh up their speech in order to climb the career ladder or make a better impression of themselves.

Accent prejudice is the perception that certain accents are inferior to others and in modern Britain there are many examples of this. A broad Birmingham accent is stigmatised as ugly and uneducated. The “Scouse” accent, spoken by people from Liverpool, gives the impression that this person is a thief and is likely to steal from you.

A colleague of mine who speaks with a Geordie accent, which he is very proud of, was once asked by an “RP” speaker if he was going to change his accent to teach English as it was unthinkable that he teach a regional accent from Newcastle to students in the Basque Country. Of course my colleague rightly rejected the notion.

This is a common problem and is equal to racism or sexism. It has a negative effect on people, encouraging them to change they way they speak and, in so doing, making them feel fake. What is more, if they do not flatten their accent, they are less likely to get the job they desire.

This ingrained linguistic prejudice makes people believe that those with more standard accents are more competent, intelligent, effective communicators and better suited to high profile jobs while those with regional accents are perhaps suited to less desirable jobs.

Only this morning, listening to Irish radio, a journalist commented on the accent of the newly appointed football manager, stating that behind the rough Yorkshire accent, there was actually a very astute and intelligent man. This is typical of the English speaking world. Judging one’s intelligence by their accent.

Academics who keep their regional accent are far and few between as they are aware that their students are likely to find them less effective if they have one, regardless of their expertise. The contradiction is impalpable.

This is undoubtedly a scary reality and more so when interviewers fall into the trap of judging a person’s ability on a mere accent. A surprising 80% of employers admit that they do discriminate based on accent. Would Margaret Thatcher have become the British Prime Minister if she hadn’t received elocution lessons to give her an exaggerated upper-class accent? Probably not.