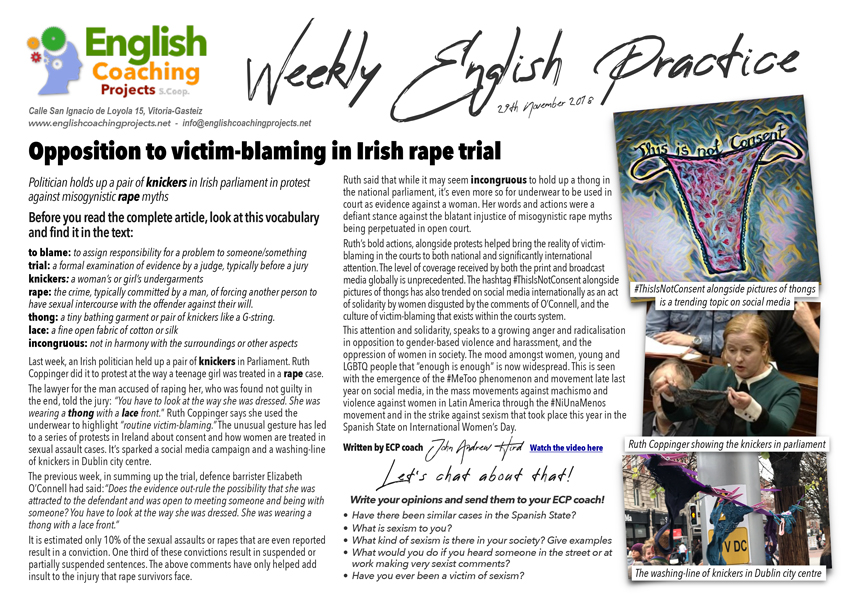 to blame: to assign responsibility for a problem to someone/something

trial: a formal examination of evidence by a judge, typically before a jury

knickers: a woman’s or girl’s undergarments

rape: the crime, typically committed by a man, of forcing another person to have sexual intercourse with the offender against their will.

thong: a tiny bathing garment or pair of knickers like a G-string.

lace: a fine open fabric of cotton or silk

incongruous: not in harmony with the surroundings or other aspects

Last week, an Irish politician held up a pair of knickers in Parliament. Ruth Coppinger did it to protest at the way a teenage girl was treated in a rape case.

The lawyer for the man accused of raping her, who was found not guilty in the end, told the jury: “You have to look at the way she was dressed. She was wearing a thong with a lace front.” Ruth Coppinger says she used the underwear to highlight “routine victim-blaming.” The unusual gesture has led to a series of protests in Ireland about consent and how women are treated in sexual assault cases. It’s sparked a social media campaign and a washing-line of knickers in Dublin city centre.

The previous week, in summing up the trial, defence barrister Elizabeth O’Connell had said: “Does the evidence out-rule the possibility that she was attracted to the defendant and was open to meeting someone and being with someone? You have to look at the way she was dressed. She was wearing a thong with a lace front.”

It is estimated only 10% of the sexual assaults or rapes that are even reported result in a conviction. One third of these convictions result in suspended or partially suspended sentences. The above comments have only helped add insult to the injury that rape survivors face.

Ruth said that while it may seem incongruous to hold up a thong in the national parliament, it’s even more so for underwear to be used in court as evidence against a woman. Her words and actions were a defiant stance against the blatant injustice of misogynistic rape myths being perpetuated in open court.

Ruth’s bold actions, alongside protests, helped bring the reality of victim-blaming in the courts to both national and significantly international attention. The level of coverage received by both the print and broadcast media globally is unprecedented. The hashtag #ThisIsNotConsent alongside pictures of thongs has also trended on social media internationally as an act of solidarity by women disgusted by the comments of O’Connell, and the culture of victim-blaming that exists within the courts system.

This attention and solidarity, speaks to a growing anger and radicalisation in opposition to gender-based violence and harassment, and the oppression of women in society. The mood amongst women, young and LGBTQ people that “enough is enough” is now widespread. This is seen with the emergence of the #MeToo phenomenon and movement late last year on social media, in the mass movements against machismo and violence against women in Latin America through the #NiUnaMenos movement and in the strike against sexism that took place this year in the Spanish State on International Women’s Day.

Write your opinions and send them to your ECP coach!