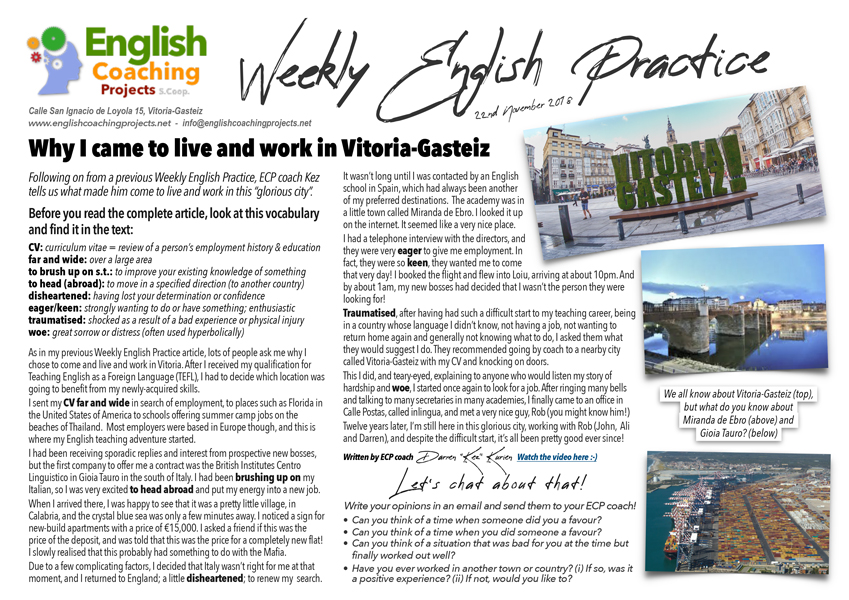 ECP coach Kez tells us why he came to Vitoria-Gasteiz

Following on from a previous Weekly English Practice, ECP coach Kez tells us what made him come to live and work in this “glorious city”

far and wide: over a large area

to brush up on s.t.: to improve your existing knowledge of something

to head (abroad): to move in a specified direction (to another country)

disheartened: having lost your determination or confidence

eager/keen: strongly wanting to do or have something; enthusiastic

traumatised: shocked as a result of a bad experience or physical injury

As in my previous Weekly English Practice article, lots of people ask me why I chose to come and live and work in Vitoria. After I received my qualification for Teaching English as a Foreign Language (TEFL), I had to decide which location was going to benefit from my newly-acquired skills.

I sent my CV far and wide in search of employment, to places such as Florida in the United States of America to schools offering summer camp jobs on the beaches of Thailand.  Most employers were based in Europe though, and this is where my English teaching adventure started.

I had been receiving sporadic replies and interest from prospective new bosses, but the first company to offer me a contract was the British Institutes Centro Linguistico in Gioia Tauro in the south of Italy. I had been brushing up on my Italian, so I was very excited to head abroad and put my energy into a new job.

When I arrived there, I was happy to see that it was a pretty little village, in Calabria, and the crystal blue sea was only a few minutes away. I noticed a sign for new-build apartments with a price of €15,000. I asked a friend if this was the price of the deposit, and was told that this was the price for a completely new flat! I slowly realised that this probably had something to do with the Mafia.

Due to a few complicating factors, I decided that Italy wasn’t right for me at that moment, and I returned to England; a little disheartened; to renew my search. It wasn’t long until I was contacted by an English school in Spain, which had always been another of my preferred destinations.  The academy was in a little town called Miranda de Ebro. I looked it up on the internet. It seemed like a very nice place.

I had a telephone interview with the directors, and they were very eager to give me employment. In fact, they were so keen, they wanted me to come that very day! I booked the flight and flew into Loiu, arriving at about 10pm. And by about 1am, my new bosses had decided that I wasn’t the person they were looking for!

Traumatised, after having had such a difficult start to my teaching career, being in a country whose language I didn’t know, not having a job, not wanting to return home again and generally not knowing what to do, I asked them what they would suggest I do. They recommended going by coach to a nearby city called Vitoria-Gasteiz with my CV and knocking on doors.

This I did, and teary-eyed, explaining to anyone who would listen to my story of hardship and woe, I started once again to look for a job. After ringing many bells and talking to many secretaries in many academies, I finally came to an office in Calle Postas, called inlingua, and met a very nice guy, Rob (you might know him!)

Twelve years later, I’m still here in this glorious city, working with Rob (John,  Ali and Darren), and despite the difficult start, it’s all been pretty good ever since!