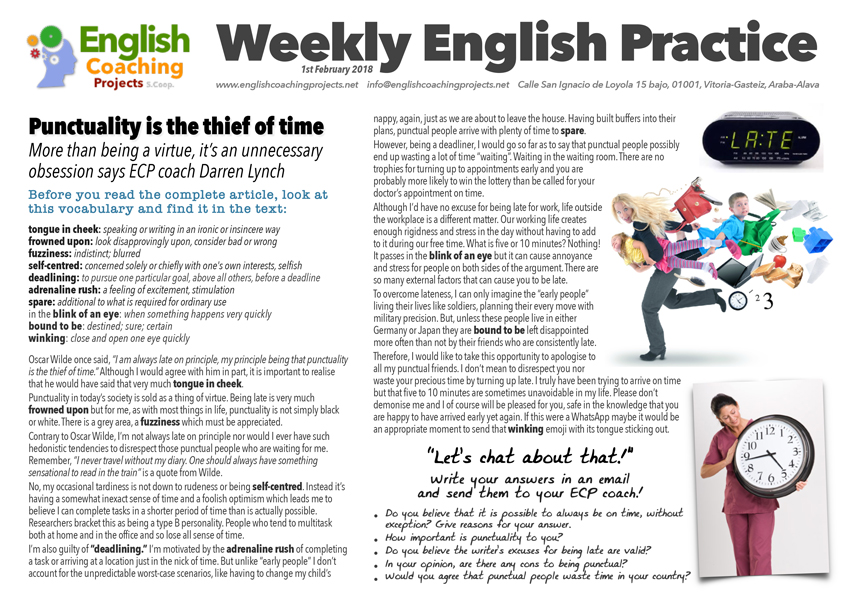 tongue in cheek: speaking or writing in an ironic or insincere way

frowned upon: look disapprovingly upon, consider bad or wrong

self-centred: concerned solely or chiefly with one’s own interests, selfish

deadlining: to pursue one particular goal, above all others, before a deadline

spare: additional to what is required for ordinary use

in the blink of an eye: when something happens very quickly

bound to be: destined; sure; certain

Oscar Wilde once said, “I am always late on principle, my principle being that punctuality is the thief of time.” Although I would agree with him in part, it is important to realise that he would have said that very much tongue in cheek.

Punctuality in today’s society is sold as a thing of virtue. Being late is very much frowned upon but for me, as with most things in life, punctuality is not simply black or white. There is a grey area, a fuzziness which must be appreciated.

Contrary to Oscar Wilde, I’m not always late on principle nor would I ever have such hedonistic tendencies to disrespect those punctual people who are waiting for me. Remember, “I never travel without my diary. One should always have something sensational to read in the train” is a quote from Wilde.

No, my occasional tardiness is not down to rudeness or being self-centred. Instead it’s having a somewhat inexact sense of time and a foolish optimism which leads me to believe I can complete tasks in a shorter period of time than is actually possible. Researchers bracket this as being a type B personality. People who tend to multitask both at home and in the office and so lose all sense of time.

I’m also guilty of “deadlining.” I’m motivated by the adrenaline rush of completing a task or arriving at a location just in the nick of time. But unlike “early people” I don’t account for the unpredictable worst-case scenarios, like having to change my child’s nappy, again, just as we are about to leave the house. Having built buffers into their plans, punctual people arrive with plenty of time to spare.

However, being a deadliner, I would go so far as to say that punctual people possibly end up wasting a lot of time “waiting”. Waiting in the waiting room. There are no trophies for turning up to appointments early and you are probably more likely to win the lottery than be called for your doctor’s appointment on time.

Although I’d have no excuse for being late for work, life outside the workplace is a different matter. Our working life creates enough rigidness and stress in the day without having to add to it during our free time. What is five or 10 minutes? Nothing! It passes in the blink of an eye but it can cause annoyance and stress for people on both sides of the argument. There are so many external factors that can cause you to be late.

To overcome lateness, I can only imagine the “early people” living their lives like soldiers, planning their every move with military precision. But, unless these people live in either Germany or Japan they are bound to be left disappointed more often than not by their friends who are consistently late.

Therefore, I would like to take this opportunity to apologise to all my punctual friends. I don’t mean to disrespect you nor waste your precious time by turning up late. I truly have been trying to arrive on time but that five to 10 minutes are sometimes unavoidable in my life. Please don’t demonise me and I of course will be pleased for you, safe in the knowledge that you are happy to have arrived early yet again. If this were a WhatsApp maybe it would be an appropriate moment to send that winking emoji with its tongue sticking out.