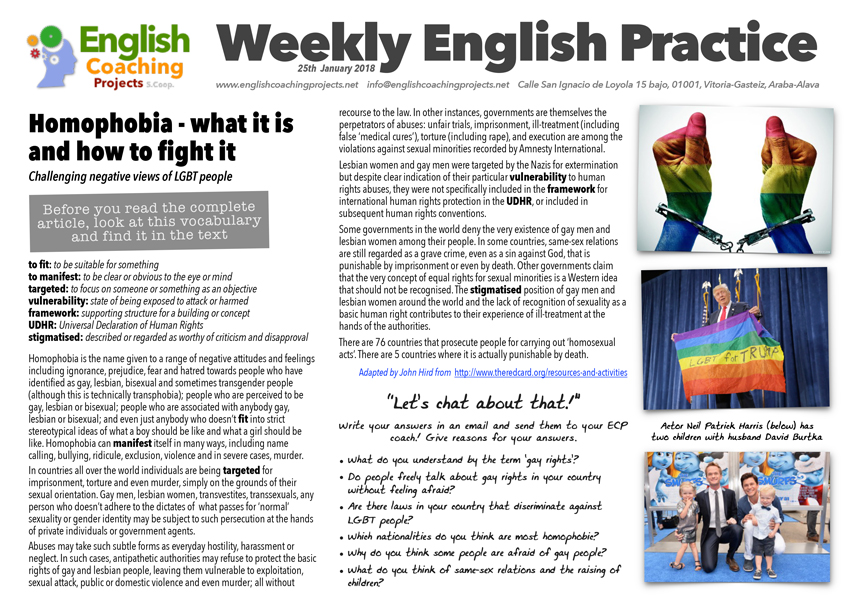 to fit: to be suitable for something

to manifest: to be clear or obvious to the eye or mind

targeted: to focus on someone or something as an objective

vulnerability: state of being exposed to attack or harmed

framework: supporting structure for a building or concept

stigmatised: described or regarded as worthy of criticism and disapproval

Homophobia is the name given to a range of negative attitudes and feelings including ignorance, prejudice, fear and hatred towards people who have identified as gay, lesbian, bisexual and sometimes transgender people (although this is technically transphobia); people who are perceived to be gay, lesbian or bisexual; people who are associated with anybody gay, lesbian or bisexual; and even just anybody who doesn’t fit into strict stereotypical ideas of what a boy should be like and what a girl should be like. Homophobia can manifest itself in many ways, including name calling, bullying, ridicule, exclusion, violence and in severe cases, murder.

In countries all over the world individuals are being targeted for imprisonment, torture and even murder, simply on the grounds of their sexual orientation. Gay men, lesbian women, transvestites, transsexuals, any person who doesn’t adhere to the dictates of  what passes for ‘normal’ sexuality or gender identity may be subject to such persecution at the hands of private individuals or government agents.

Abuses may take such subtle forms as everyday hostility, harassment or neglect. In such cases, antipathetic authorities may refuse to protect the basic rights of gay and lesbian people, leaving them vulnerable to exploitation, sexual attack, public or domestic violence and even murder; all without recourse to the law. In other instances, governments are themselves the perpetrators of abuses: unfair trials, imprisonment, ill-treatment (including false ‘medical cures’), torture (including rape), and execution are among the violations against sexual minorities recorded by Amnesty International.

Lesbian women and gay men were targeted by the Nazis for extermination but despite clear indication of their particular vulnerability to human rights abuses, they were not specifically included in the framework for international human rights protection in the UDHR, or included in subsequent human rights conventions.

Some governments in the world deny the very existence of gay men and lesbian women among their people. In some countries, same-sex relations are still regarded as a grave crime, even as a sin against God, that is punishable by imprisonment or even by death. Other governments claim that the very concept of equal rights for sexual minorities is a Western idea that should not be recognised. The stigmatised position of gay men and lesbian women around the world and the lack of recognition of sexuality as a basic human right contributes to their experience of ill-treatment at the hands of the authorities.

There are 76 countries that prosecute people for carrying out ‘homosexual acts’. There are 5 countries where it is actually punishable by death.

Adapted by John Hird from  http://www.theredcard.org/resources-and-activities