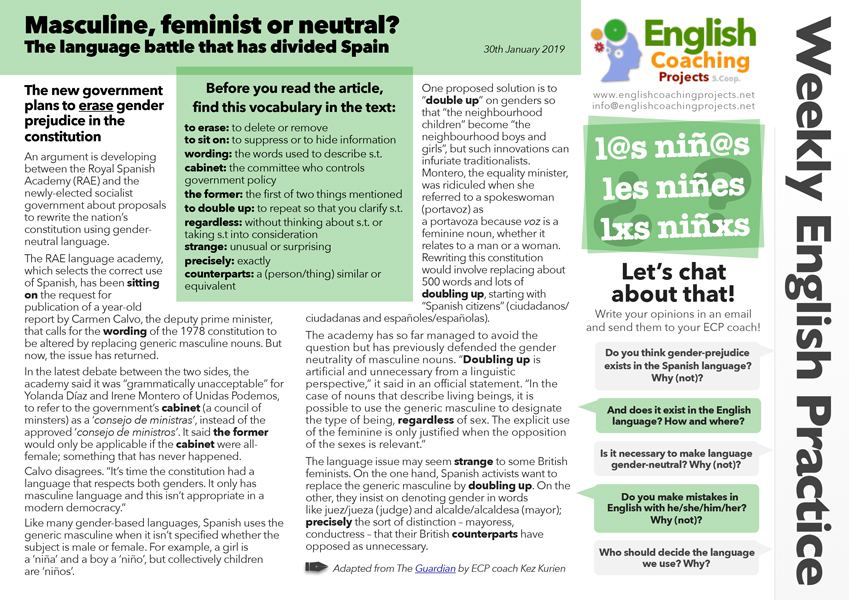 to erase: to delete or remove

to sit on: to suppress or to hide information

the former: the first of two things mentioned

to double up: to repeat so that you clarify s.t.

regardless: without thinking about s.t. or taking s.t into consideration

counterparts: a (person/thing) similar or equivalent

The new government plans to erase gender prejudice in the constitution

An argument is developing between the Royal Spanish Academy (RAE) and the newly-elected socialist government about proposals to rewrite the nation’s constitution using gender-neutral language.

The RAE language academy, which selects the correct use of Spanish, has been sitting on the request for publication of a year-old report by Carmen Calvo, the deputy prime minister, that calls for the wording of the 1978 constitution to be altered by replacing generic masculine nouns. But now, the issue has returned.

In the latest debate between the two sides, the academy said it was “grammatically unacceptable” for Yolanda Díaz and Irene Montero of Unidas Podemos, to refer to the government’s cabinet (a council of minsters) as a ‘consejo de ministras’, instead of the approved ‘consejo de ministros’. It said the former would only be applicable if the cabinet were all-female; something that has never happened.

Calvo disagrees. “It’s time the constitution had a language that respects both genders. It only has masculine language and this isn’t appropriate in a modern democracy.”

Like many gender-based languages, Spanish uses the generic masculine when it isn’t specified whether the subject is male or female. For example, a girl is a ‘niña’ and a boy a ‘niño’, but collectively children are ‘niños’.

One proposed solution is to “double up” on genders so that “the neighbourhood children” become “the neighbourhood boys and girls”, but such innovations can infuriate traditionalists. Montero, the equality minister, was ridiculed when she referred to a spokeswoman (portavoz) as a portavoza because voz is a feminine noun, whether it relates to a man or a woman. Rewriting this constitution would involve replacing about 500 words and lots of doubling up, starting with “Spanish citizens” (ciudadanos/ciudadanas and españoles/españolas).

The academy has so far managed to avoid the question but has previously defended the gender neutrality of masculine nouns. “Doubling up is artificial and unnecessary from a linguistic perspective,” it said in an official statement. “In the case of nouns that describe living beings, it is possible to use the generic masculine to designate the type of being, regardless of sex. The explicit use of the feminine is only justified when the opposition of the sexes is relevant.”

The language issue may seem strange to some British feminists. On the one hand, Spanish activists want to replace the generic masculine by doubling up. On the other, they insist on denoting gender in words like juez/jueza (judge) and alcalde/alcaldesa (mayor); precisely the sort of distinction – mayoress, conductress – that their British counterparts have opposed as unnecessary.

Adapted from The Guardian by ECP coach Kez Kurien