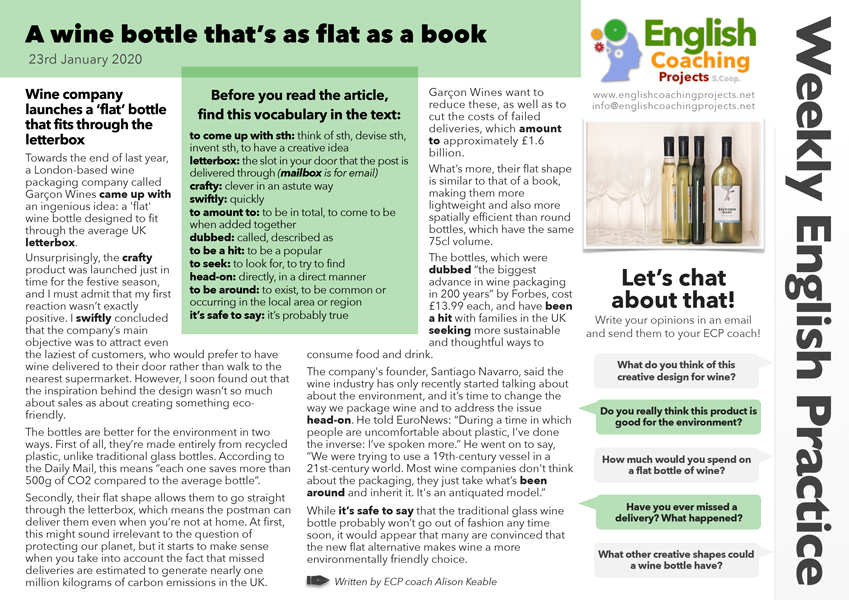 to come up with sth: think of sth, devise sth, invent sth, to have a creative idea

letterbox: the slot in your door that the post is delivered through (mailbox is for email)

crafty: clever in an astute way

to amount to: to be in total, to come to be when added together

to be a hit: to be a popular

to seek: to look for, to try to find

head-on: directly, in a direct manner

to be around: to exist, to be common or occurring in the local area or region

Towards the end of last year, a London-based wine packaging company called Garçon Wines came up with an ingenious idea: a ‘flat’ wine bottle designed to fit through the average UK letterbox.

Unsurprisingly, the crafty product was launched just in time for the festive season, and I must admit that my first reaction wasn’t exactly positive. I swiftly concluded that the company’s main objective was to attract even the laziest of customers, who would prefer to have wine delivered to their door rather than walk to the nearest supermarket. However, I soon found out that the inspiration behind the design wasn’t so much about sales as about creating something eco-friendly.

The bottles are better for the environment in two ways. First of all, they’re made entirely from recycled plastic, unlike traditional glass bottles. According to the Daily Mail, this means “each one saves more than 500g of CO2 compared to the average bottle”.

Secondly, their flat shape allows them to go straight through the letterbox, which means the postman can deliver them even when you’re not at home. At first, this might sound irrelevant to the question of protecting our planet, but it starts to make sense when you take into account the fact that missed deliveries are estimated to generate nearly one million kilograms of carbon emissions in the UK. Garçon Wines want to reduce these, as well as to cut the costs of failed deliveries, which amount to approximately £1.6 billion.

What’s more, their flat shape is similar to that of a book, making them more lightweight and also more spatially efficient than round bottles, which have the same 75cl volume.

The bottles, which were dubbed “the biggest advance in wine packaging in 200 years” by Forbes, cost £13.99 each, and have been a hit with families in the UK seeking more sustainable and thoughtful ways to consume food and drink.

The company’s founder, Santiago Navarro, said the wine industry has only recently started talking about about the environment, and it’s time to change the way we package wine and to address the issue head-on. He told EuroNews: “During a time in which people are uncomfortable about plastic, I’ve done the inverse: I’ve spoken more.” He went on to say, “We were trying to use a 19th-century vessel in a 21st-century world. Most wine companies don’t think about the packaging, they just take what’s been around and inherit it. It’s an antiquated model.”

While it’s safe to say that the traditional glass wine bottle probably won’t go out of fashion any time soon, it would appear that many are convinced that the new flat alternative makes wine a more environmentally friendly choice.