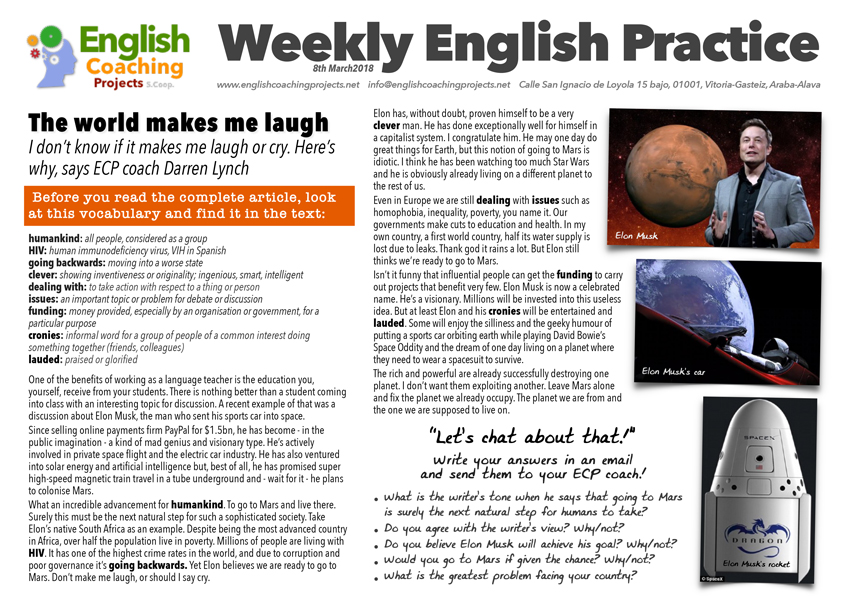 I don’t know if the world makes me laugh or cry. Here’s why, says ECP coach Darren Lynch

Before you read the complete article, look  at this vocabulary and find it in the text:

humankind: all people, considered as a group

dealing with: to take action with respect to a thing or person

issues: an important topic or problem for debate or discussion

funding: money provided, especially by an organisation or government, for a particular purpose

cronies: informal word for a group of people of a common interest doing something together (friends, colleagues)

One of the benefits of working as a language teacher is the education you, yourself, receive from your students. There is nothing better than a student coming into class with an interesting topic for discussion. A recent example of that was a discussion about Elon Musk, the man who sent his sports car into space.

Since selling online payments firm PayPal for $1.5bn, he has become – in the public imagination – a kind of mad genius and visionary type. He’s actively involved in private space flight and the electric car industry. He has also ventured into solar energy and artificial intelligence but, best of all, he has promised super high-speed magnetic train travel in a tube underground and – wait for it – he plans to colonise Mars.

What an incredible advancement for humankind. To go to Mars and live there. Surely this must be the next natural step for such a sophisticated society. Take Elon’s native South Africa as an example. Despite being the most advanced country in Africa, over half the population live in poverty. Millions of people are living with HIV. It has one of the highest crime rates in the world, and due to corruption and poor governance it’s going backwards. Yet Elon believes we are ready to go to Mars. Don’t make me laugh, or should I say cry.

Elon has, without doubt, proven himself to be a very clever man. He has done exceptionally well for himself in a capitalist system. I congratulate him. He may one day do great things for Earth, but this notion of going to Mars is idiotic. I think he has been watching too much Star Wars and he is obviously already living on a different planet to the rest of us.

Even in Europe we are still dealing with issues such as homophobia, inequality, poverty, you name it. Our governments make cuts to education and health. In my own country, a first world country, half its water supply is lost due to leaks. Thank god it rains a lot. But Elon still thinks we’re ready to go to Mars.

Isn’t it funny that influential people can get the funding to carry out projects that benefit very few. Elon Musk is now a celebrated name. He’s a visionary. Millions will be invested into this useless idea. But at least Elon and his cronies will be entertained and lauded. Some will enjoy the silliness and the geeky humour of putting a sports car orbiting earth while playing David Bowie’s Space Oddity and the dream of one day living on a planet where they need to wear a spacesuit to survive.

The rich and powerful are already successfully destroying one planet. I don’t want them exploiting another. Leave Mars alone and fix the planet we already occupy. The planet we are from and the one we are supposed to live on.