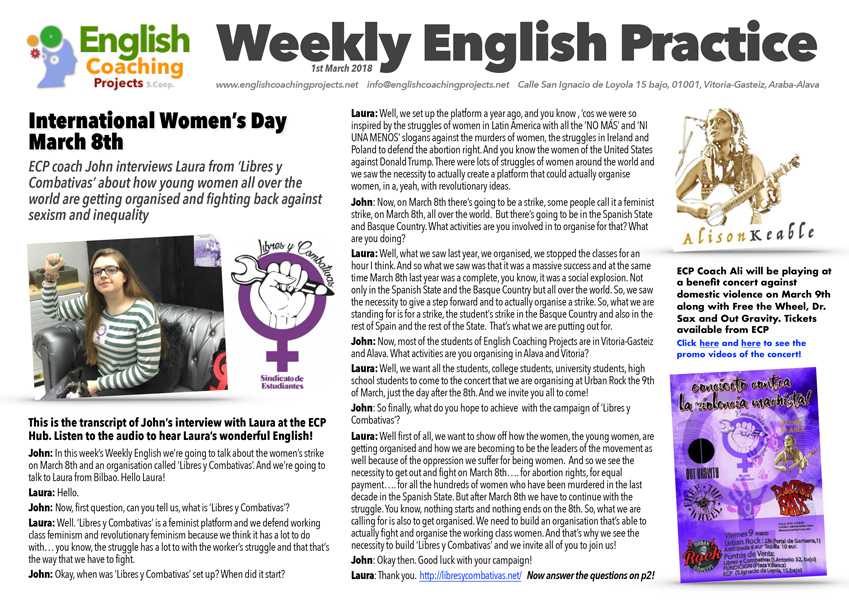 This is the transcript of John’s interview with Laura at the ECP Hub. Listen to the audio to hear Laura’s wonderful English!

John: Now, first question, can you tell us, what is ‘Libres y Combativas’?

Laura: Well. ‘Libres y Combativas’ is a feminist platform and we defend working class feminism and revolutionary feminism because we think it has a lot to do with… you know, the struggle has a lot to with the worker’s struggle and that that’s the way that we have to fight.

John: Okay, when was ‘Libres y Combativas’ set up? When did it start?

Laura: Well, we set up the platform a year ago, and you know , ’cos we were so inspired by the struggles of women in Latin America with all the ‘NO MÁS’ and ‘NI UNA MENOS’ slogans against the murders of women, the struggles in Ireland and Poland to defend the abortion right. And you know the women of the United States against Donald Trump. There were lots of struggles of women around the world and we saw the necessity to actually create a platform that could actually organise women, in a, yeah, with revolutionary ideas.

Laura: Well, what we saw last year, we organised, we stopped the classes for an hour I think. And so what we saw was that it was a massive success and at the same time March 8th last year was a complete, you know, it was a social explosion. Not only in the Spanish State and the Basque Country but all over the world. So, we saw the necessity to give a step forward and to actually organise a strike. So, what we are standing for is for a strike, the student’s strike in the Basque Country and also in the rest of Spain and the rest of the State.  That’s what we are putting out for.

John: Now, most of the students of English Coaching Projects are in Vitoria-Gasteiz and Alava. What activities are you organising in Alava and Vitoria?

Laura: Well, we want all the students, college students, university students, high school students to come to the concert that we are organising at Urban Rock the 9th of March, just the day after the 8th. And we invite you all to come!

John: So finally, what do you hope to achieve  with the campaign of ‘Libres y Combativas’?

Laura: Well first of all, we want to show off how the women, the young women, are getting organised and how we are becoming to be the leaders of the movement as well because of the oppression we suffer for being women.  And so we see the necessity to get out and fight on March 8th…. for abortion rights, for equal payment…. for all the hundreds of women who have been murdered in the last decade in the Spanish State. But after March 8th we have to continue with the struggle. You know, nothing starts and nothing ends on the 8th. So, what we are calling for is also to get organised. We need to build an organisation that’s able to actually fight and organise the working class women. And that’s why we see the necessity to build ‘Libres y Combativas’ and we invite all of you to join us!

John: Okay then. Good luck with your campaign!