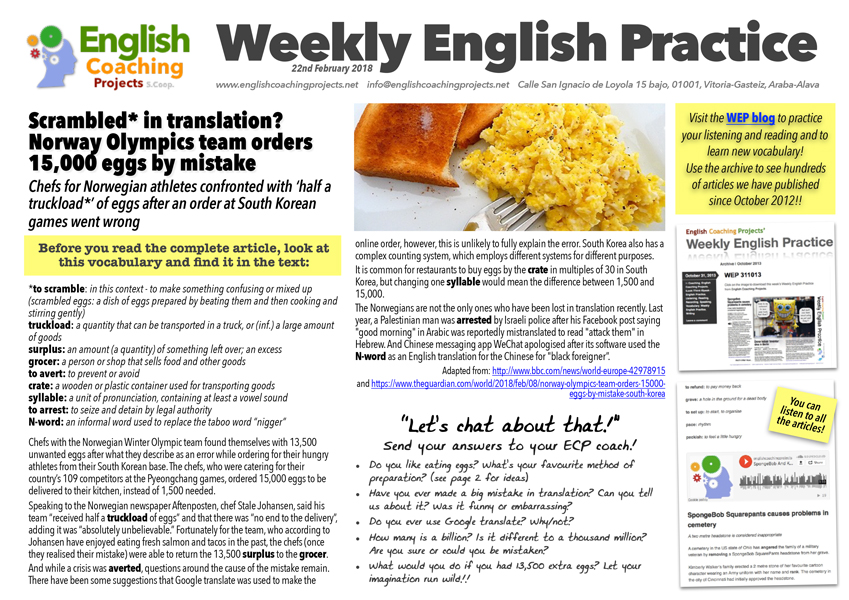 Scrambled* in translation? Chefs for Norwegian athletes confronted with ‘half a truckload*’ of eggs after an order at South Korean games went wrong

*to scramble: in this context – to make something confusing or mixed up

(scrambled eggs: a dish of eggs prepared by beating them and then cooking and stirring gently)

truckload: a quantity that can be transported in a truck, or (inf.) a large amount of goods

surplus: an amount (a quantity) of something left over; an excess

grocer: a person or shop that sells food and other goods

to avert: to prevent or avoid

crate: a wooden or plastic container used for transporting goods

syllable: a unit of pronunciation, containing at least a vowel sound

to arrest: to seize and detain by legal authority

Chefs with the Norwegian Winter Olympic team found themselves with 13,500 unwanted eggs after what they describe as an error while ordering for their hungry athletes from their South Korean base. The chefs, who were catering for their country’s 109 competitors at the Pyeongchang games, ordered 15,000 eggs to be delivered to their kitchen, instead of 1,500 needed.

Speaking to the Norwegian newspaper Aftenposten, chef Stale Johansen, said his team “received half a truckload of eggs” and that there was “no end to the delivery”, adding it was “absolutely unbelievable.” Fortunately for the team, who according to Johansen have enjoyed eating fresh salmon and tacos in the past, the chefs (once they realised their mistake) were able to return the 13,500 surplus to the grocer.

And while a crisis was averted, questions around the cause of the mistake remain. There have been some suggestions that Google translate was used to make the online order, however, this is unlikely to fully explain the error. South Korea also has a complex counting system, which employs different systems for different purposes.

It is common for restaurants to buy eggs by the crate in multiples of 30 in South Korea, but changing one syllable would mean the difference between 1,500 and 15,000.

The Norwegians are not the only ones who have been lost in translation recently. Last year, a Palestinian man was arrested by Israeli police after his Facebook post saying “good morning” in Arabic was reportedly mistranslated to read “attack them” in Hebrew. And Chinese messaging app WeChat apologised after its software used the N-word as an English translation for the Chinese for “black foreigner”.