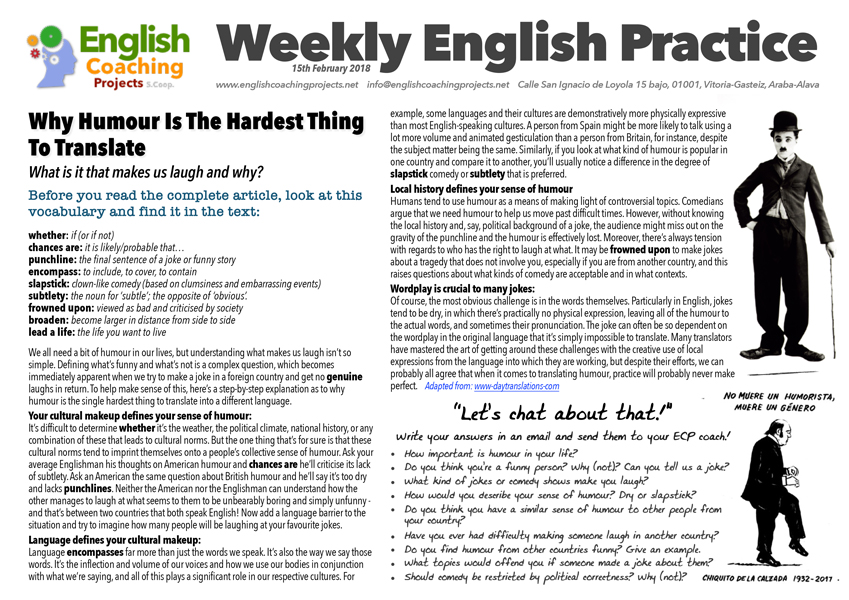 What is it that makes us laugh and why?

chances are: it is likely/probable that…

punchline: the final sentence of a joke or funny story

encompass: to include, to cover, to contain

slapstick: clown-like comedy (based on clumsiness and embarrassing events)

subtlety: the noun for ‘subtle’; the opposite of ‘obvious’.

frowned upon: viewed as bad and criticised by society

broaden: become larger in distance from side to side

lead a life: the life you want to live

We all need a bit of humour in our lives, but understanding what makes us laugh isn’t so simple. Defining what’s funny and what’s not is a complex question, which becomes immediately apparent when we try to make a joke in a foreign country and get no genuine laughs in return. To help make sense of this, here’s a step-by-step explanation as to why humour is the single hardest thing to translate into a different language.

Your cultural makeup defines your sense of humour:

It’s difficult to determine whether it’s the weather, the political climate, national history, or any combination of these that leads to cultural norms. But the one thing that’s for sure is that these cultural norms tend to imprint themselves onto a people’s collective sense of humour. Ask your average Englishman his thoughts on American humour and chances are he’ll criticise its lack of subtlety. Ask an American the same question about British humour and he’ll say it’s too dry and lacks punchlines. Neither the American nor the Englishman can understand how the other manages to laugh at what seems to them to be unbearably boring and simply unfunny – and that’s between two countries that both speak English! Now add a language barrier to the situation and try to imagine how many people will be laughing at your favourite jokes.

Language encompasses far more than just the words we speak. It’s also the way we say those words. It’s the inflection and volume of our voices and how we use our bodies in conjunction with what we’re saying, and all of this plays a significant role in our respective cultures. For example, some languages and their cultures are demonstratively more physically expressive than most English-speaking cultures. A person from Spain might be more likely to talk using a lot more volume and animated gesticulation than a person from Britain, for instance, despite the subject matter being the same. Similarly, if you look at what kind of humour is popular in one country and compare it to another, you’ll usually notice a difference in the degree of slapstick comedy or subtlety that is preferred.

Humans tend to use humour as a means of making light of controversial topics. Comedians argue that we need humour to help us move past difficult times. However, without knowing the local history and, say, political background of a joke, the audience might miss out on the gravity of the punchline and the humour is effectively lost. Moreover, there’s always tension with regards to who has the right to laugh at what. It may be frowned upon to make jokes about a tragedy that does not involve you, especially if you are from another country, and this raises questions about what kinds of comedy are acceptable and in what contexts.

Wordplay is crucial to many jokes:

Of course, the most obvious challenge is in the words themselves. Particularly in English, jokes tend to be dry, in which there’s practically no physical expression, leaving all of the humour to the actual words, and sometimes their pronunciation. The joke can often be so dependent on the wordplay in the original language that it’s simply impossible to translate. Many translators have mastered the art of getting around these challenges with the creative use of local expressions from the language into which they are working, but despite their efforts, we can probably all agree that when it comes to translating humour, practice will probably never make perfect.