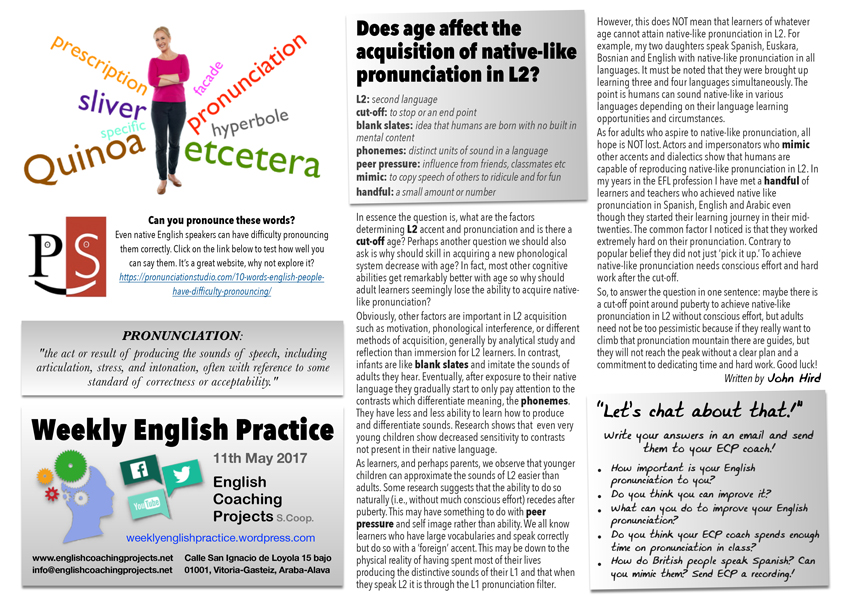 cut-off: to stop or an end point

blank slates: idea that humans are born with no built in mental content

phonemes: distinct units of sound in a language

mimic: to copy speech of others to ridicule and for fun

handful: a small amount or number

In essence the question is, what are the factors determining L2 accent and pronunciation and is there a cut-off age? Perhaps another question we should also ask is why should skill in acquiring a new phonological system decrease with age? In fact, most other cognitive abilities get remarkably better with age so why should adult learners seemingly lose the ability to acquire native-like pronunciation?

Obviously, other factors are important in L2 acquisition such as motivation, phonological interference, or different methods of acquisition, generally by analytical study and reflection than immersion for L2 learners. In contrast, infants are like blank slates and imitate the sounds of adults they hear. Eventually, after exposure to their native language they gradually start to only pay attention to the contrasts which differentiate meaning, the phonemes. They have less and less ability to learn how to produce and differentiate sounds. Research shows that  even very young children show decreased sensitivity to contrasts not present in their native language.

As learners, and perhaps parents, we observe that younger children can approximate the sounds of L2 easier than adults. Some research suggests that the ability to do so naturally (i.e., without much conscious effort) recedes after puberty. This may have something to do with peer pressure and self image rather than ability. We all know learners who have large vocabularies and speak correctly but do so with a ‘foreign’ accent. This may be down to the physical reality of having spent most of their lives producing the distinctive sounds of their L1 and that when they speak L2 it is through the L1 pronunciation filter.

So, to answer the question in one sentence: maybe there is a cut-off point around puberty to achieve native-like pronunciation in L2 without conscious effort, but adults need not be too pessimistic because if they really want to climb that pronunciation mountain there are guides, but they will not reach the peak without a clear plan and a commitment to dedicating time and hard work. Good luck!