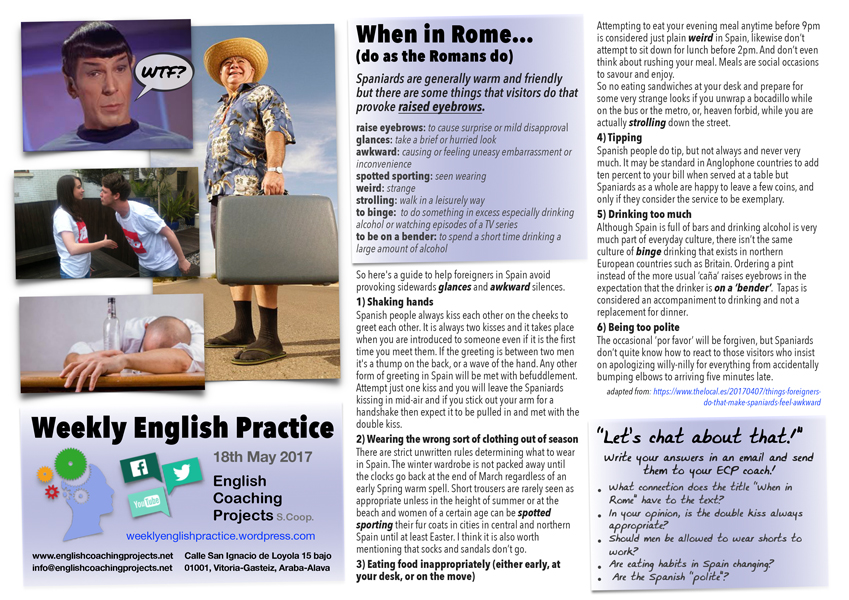 Spaniards are generally warm and friendly but there are some things that visitors do that provoke raised eyebrows.

raise eyebrows: to cause surprise or mild disapproval

strolling: walk in a leisurely way

to binge:  to do something in excess especially drinking alcohol or watching episodes of a TV series

to be on a bender: to spend a short time drinking a large amount of alcohol

So here’s a guide to help foreigners in Spain avoid provoking sidewards glances and awkward silences.

Spanish people always kiss each other on the cheeks to greet each other. It is always two kisses and it takes place when you are introduced to someone even if it is the first time you meet them. If the greeting is between two men it’s a thump on the back, or a wave of the hand. Any other form of greeting in Spain will be met with befuddlement. Attempt just one kiss and you will leave the Spaniards kissing in mid-air and if you stick out your arm for a handshake then expect it to be pulled in and met with the double kiss.

2) Wearing the wrong sort of clothing out of season

There are strict unwritten rules determining what to wear in Spain. The winter wardrobe is not packed away until the clocks go back at the end of March regardless of an early Spring warm spell. Short trousers are rarely seen as appropriate unless in the height of summer or at the beach and women of a certain age can be spotted sporting their fur coats in cities in central and northern Spain until at least Easter. I think it is also worth mentioning that socks and sandals don’t go.

3) Eating food inappropriately (either early, at your desk, or on the move)

Attempting to eat your evening meal anytime before 9pm is considered just plain weird in Spain, likewise don’t attempt to sit down for lunch before 2pm. And don’t even think about rushing your meal. Meals are social occasions to savour and enjoy.

So no eating sandwiches at your desk and prepare for some very strange looks if you unwrap a bocadillo while on the bus or the metro, or, heaven forbid, while you are actually strolling down the street.

Spanish people do tip, but not always and never very much. It may be standard in Anglophone countries to add ten percent to your bill when served at a table but Spaniards as a whole are happy to leave a few coins, and only if they consider the service to be exemplary.

Although Spain is full of bars and drinking alcohol is very much part of everyday culture, there isn’t the same culture of binge drinking that exists in northern European countries such as Britain. Ordering a pint instead of the more usual ‘caña’ raises eyebrows in the expectation that the drinker is on a ‘bender’.  Tapas is considered an accompaniment to drinking and not a replacement for dinner.

The occasional ‘por favor’ will be forgiven, but Spaniards don’t quite know how to react to those visitors who insist on apologizing willy-nilly for everything from accidentally bumping elbows to arriving five minutes late.