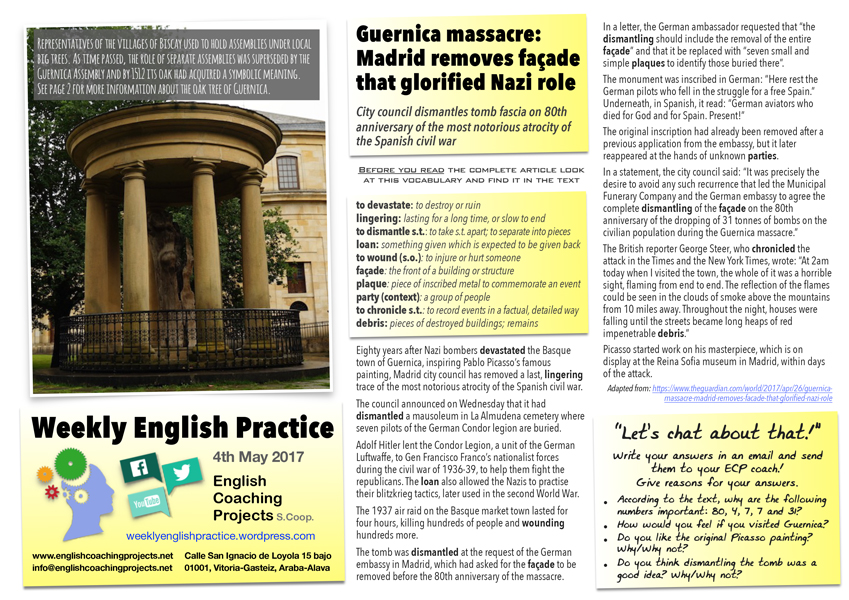 Before you read the complete article look at this vocabulary and find it in the text:

to devastate: to destroy or ruin

lingering: lasting for a long time, or slow to end

to dismantle s.t.: to take s.t. apart; to separate into pieces

loan: something given which is expected to be given back

to wound (s.o.): to injure or hurt someone

façade: the front of a building or structure

plaque: piece of inscribed metal to commemorate an event

party (context): a group of people

to chronicle s.t.: to record events in a factual, detailed way

The council announced on Wednesday that it had dismantled a mausoleum in La Almudena cemetery where seven pilots of the German Condor legion are buried.

Adolf Hitler lent the Condor Legion, a unit of the German Luftwaffe, to Gen Francisco Franco’s nationalist forces during the civil war of 1936-39, to help them fight the republicans. The loan also allowed the Nazis to practise their blitzkrieg tactics, later used in the second World War.

The 1937 air raid on the Basque market town lasted for four hours, killing hundreds of people and wounding hundreds more.

The tomb was dismantled at the request of the German embassy in Madrid, which had asked for the façade to be removed before the 80th anniversary of the massacre.

In a letter, the German ambassador requested that “the dismantling should include the removal of the entire façade” and that it be replaced with “seven small and simple plaques to identify those buried there”.

The monument was inscribed in German: “Here rest the German pilots who fell in the struggle for a free Spain.” Underneath, in Spanish, it read: “German aviators who died for God and for Spain. Present!”

The original inscription had already been removed after a previous application from the embassy, but it later reappeared at the hands of unknown parties.

In a statement, the city council said: “It was precisely the desire to avoid any such recurrence that led the Municipal Funerary Company and the German embassy to agree the complete dismantling of the façade on the 80th anniversary of the dropping of 31 tonnes of bombs on the civilian population during the Guernica massacre.”

The British reporter George Steer, who chronicled the attack in the Times and the New York Times, wrote: “At 2am today when I visited the town, the whole of it was a horrible sight, flaming from end to end. The reflection of the flames could be seen in the clouds of smoke above the mountains from 10 miles away. Throughout the night, houses were falling until the streets became long heaps of red impenetrable debris.”

Picasso started work on his masterpiece, which is on display at the Reina Sofia museum in Madrid, within days of the attack.