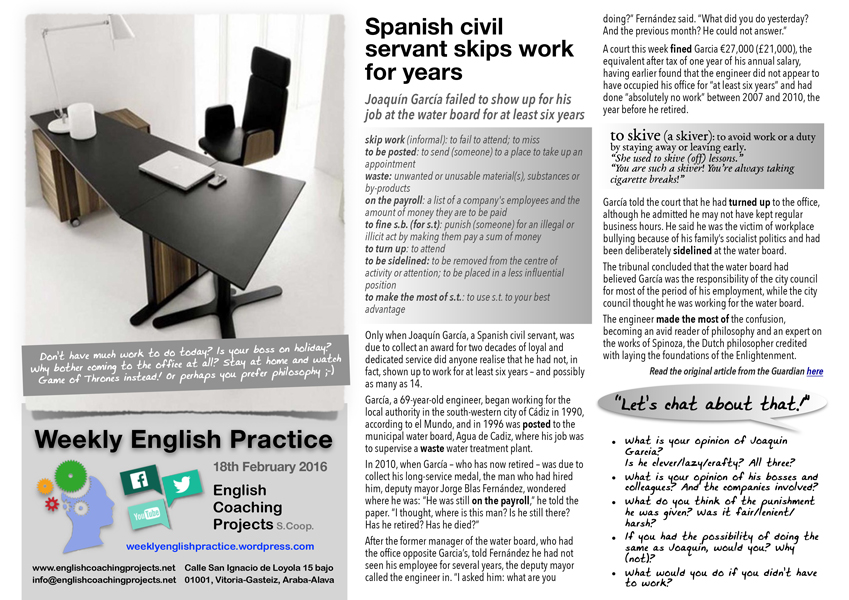 skip work (informal): to fail to attend; to miss

to be posted: to send (someone) to a place to take up an appointment

on the payroll: a list of a company’s employees and the amount of money they are to be paid

to fine s.b. (for s.t): punish (someone) for an illegal or illicit act by making them pay a sum of money

to turn up: to attend

to be sidelined: to be removed from the centre of activity or attention; to be placed in a less influential position

to make the most of s.t.: to use s.t. to your best advantage

Only when Joaquín García, a Spanish civil servant, was due to collect an award for two decades of loyal and dedicated service did anyone realise that he had not, in fact, shown up to work for at least six years – and possibly as many as 14.

García, a 69-year-old engineer, began working for the local authority in the south-western city of Cádiz in 1990, according to el Mundo, and in 1996 was posted to the municipal water board, Agua de Cadiz, where his job was to supervise a waste water treatment plant.

In 2010, when García – who has now retired – was due to collect his long-service medal, the man who had hired him, deputy mayor Jorge Blas Fernández, wondered where he was: “He was still on the payroll,” he told the paper. “I thought, where is this man? Is he still there? Has he retired? Has he died?”

After the former manager of the water board, who had the office opposite Garcia’s, told Fernández he had not seen his employee for several years, the deputy mayor called the engineer in. “I asked him: what are you doing?” Fernández said. “What did you do yesterday? And the previous month? He could not answer.”

A court this week fined Garcia €27,000 (£21,000), the equivalent after tax of one year of his annual salary, having earlier found that the engineer did not appear to have occupied his office for “at least six years” and had done “absolutely no work” between 2007 and 2010, the year before he retired.

to skive (a skiver): to avoid work or a duty by staying away or leaving early.

“She used to skive (off) lessons.”

“You are such a skiver! You’re always taking cigarette breaks!”

García told the court that he had turned up to the office, although he admitted he may not have kept regular business hours. He said he was the victim of workplace bullying because of his family’s socialist politics and had been deliberately sidelined at the water board.

The engineer made the most of the confusion, becoming an avid reader of philosophy and an expert on the works of Spinoza, the Dutch philosopher credited with laying the foundations of the Enlightenment.

Read the original article from the Guardian here