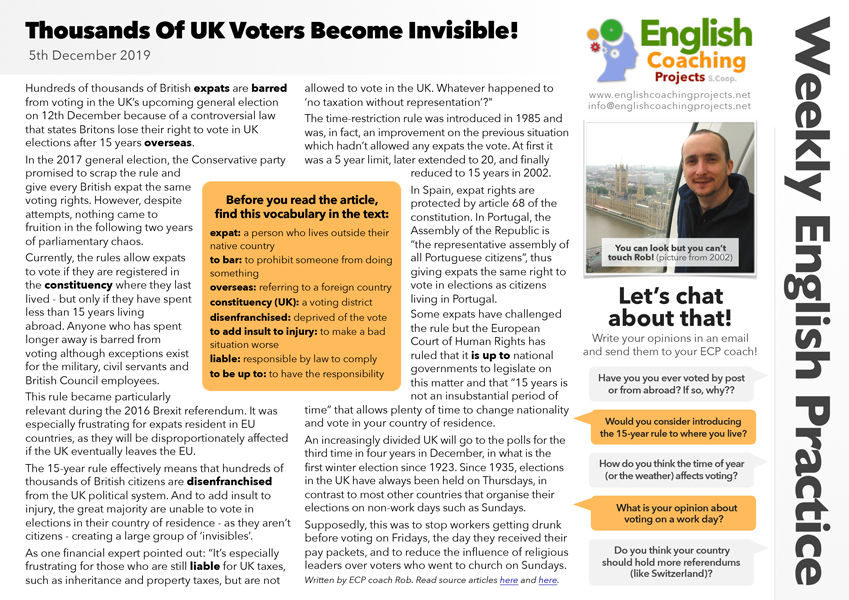 Hundreds of thousands of British expats can’t vote in the UK’s upcoming general election on 12th December because of a controversial law that states Britons lose their right to vote in UK elections after 15 years overseas.

expat: a person who lives outside their native country

to bar: to prohibit someone from doing something

overseas: referring to a foreign country

disenfranchised: deprived of the vote

to add insult to injury: to make a bad situation worse

liable: responsible by law to comply

to be up to: to have the responsibility

Hundreds of thousands of British expats are barred from voting in the UK’s upcoming general election on 12th December because of a controversial law that states Britons lose their right to vote in UK elections after 15 years overseas.

In the 2017 general election, the Conservative party promised to scrap the rule and give every British expat the same voting rights. However, despite attempts, nothing came to fruition in the following two years of parliamentary chaos.

Currently, the rules allow expats to vote if they are registered in the constituency where they last lived – but only if they have spent less than 15 years living abroad. Anyone who has spent longer away is barred from voting although exceptions exist for the military, civil servants and British Council employees.

This rule became particularly relevant during the 2016 Brexit referendum. It was especially frustrating for expats resident in EU countries, as they will be disproportionately affected if the UK eventually leaves the EU.

The 15-year rule effectively means that hundreds of thousands of British citizens are disenfranchised from the UK political system. And to add insult to injury, the great majority are unable to vote in elections in their country of residence – as they aren’t citizens – creating a large group of ‘invisibles’.

As one financial expert pointed out: “It’s especially frustrating for those who are still liable for UK taxes, such as inheritance and property taxes, but are not allowed to vote in the UK. Whatever happened to ‘no taxation without representation’?”

The time-restriction rule was introduced in 1985 and was, in fact, an improvement on the previous situation which hadn’t allowed any expats the vote. At first it was a 5 year limit, later extended to 20, and finally reduced to 15 years in 2002.

In Spain, expat rights are protected by article 68 of the constitution. In Portugal, the Assembly of the Republic is “the representative assembly of all Portuguese citizens”, thus giving expats the same right to vote in elections as citizens living in Portugal.

Some expats have challenged the rule but the European Court of Human Rights has ruled that it is up to national governments to legislate on this matter and that “15 years is not an insubstantial period of time” that allows plenty of time to change nationality and vote in your country of residence.

An increasingly divided UK will go to the polls for the third time in four years in December, in what is the first winter election since 1923. Since 1935, elections in the UK have always been held on Thursdays, in contrast to most other countries that organise their elections on non-work days such as Sundays.

Supposedly, this was to stop workers getting drunk before voting on Fridays, the day they received their pay packets, and to reduce the influence of religious leaders over voters who went to church on Sundays.