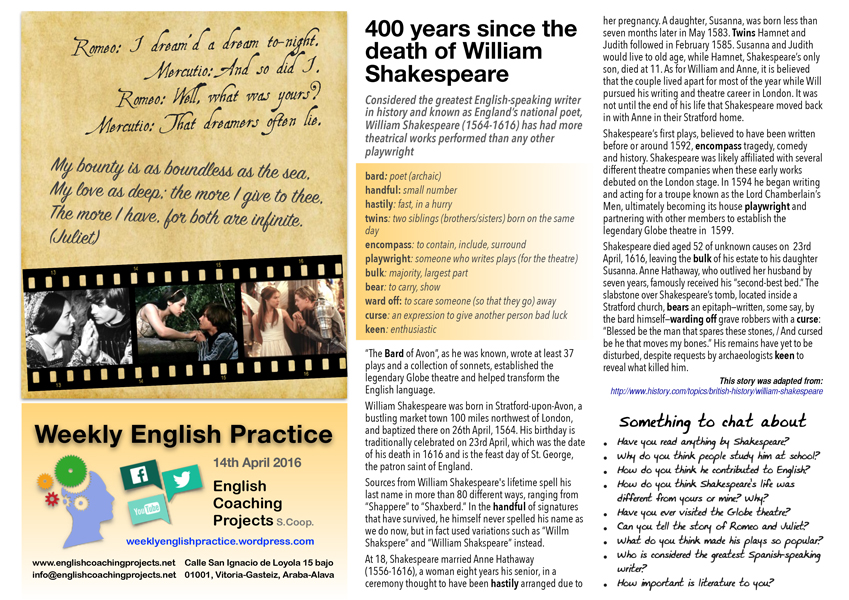 Considered the greatest English-speaking writer in history and known as England’s national poet, William Shakespeare (1564-1616) has had more theatrical works performed than any other playwright

hastily: fast, in a hurry

encompass: to contain, include, surround

playwright: someone who writes plays (for the theatre)

ward off: to scare someone (so that they go) away

curse: an expression to give another person bad luck

“The Bard of Avon”, as he was known, wrote at least 37 plays and a collection of sonnets, established the legendary Globe theatre and helped transform the English language.

William Shakespeare was born in Stratford-upon-Avon, a bustling market town 100 miles northwest of London, and baptized there on 26th April, 1564. His birthday is traditionally celebrated on 23rd April, which was the date of his death in 1616 and is the feast day of St. George, the patron saint of England.

Sources from William Shakespeare’s lifetime spell his last name in more than 80 different ways, ranging from “Shappere” to “Shaxberd.” In the handful of signatures that have survived, he himself never spelled his name as we do now, but in fact used variations such as “Willm Shakspere” and “William Shakspeare” instead.

At 18, Shakespeare married Anne Hathaway (1556-1616), a woman eight years his senior, in a ceremony thought to have been hastily arranged due to her pregnancy. A daughter, Susanna, was born less than seven months later in May 1583. Twins Hamnet and Judith followed in February 1585. Susanna and Judith would live to old age, while Hamnet, Shakespeare’s only son, died at 11. As for William and Anne, it is believed that the couple lived apart for most of the year while Will pursued his writing and theatre career in London. It was not until the end of his life that Shakespeare moved back in with Anne in their Stratford home.

Shakespeare’s first plays, believed to have been written before or around 1592, encompass tragedy, comedy and history. Shakespeare was likely affiliated with several different theatre companies when these early works debuted on the London stage. In 1594 he began writing and acting for a troupe known as the Lord Chamberlain’s Men, ultimately becoming its house playwright and partnering with other members to establish the legendary Globe theatre in  1599.

Shakespeare died aged 52 of unknown causes on  23rd April, 1616, leaving the bulk of his estate to his daughter Susanna. Anne Hathaway, who outlived her husband by seven years, famously received his “second-best bed.” The slabstone over Shakespeare’s tomb, located inside a Stratford church, bears an epitaph—written, some say, by the bard himself—warding off grave robbers with a curse: “Blessed be the man that spares these stones, / And cursed be he that moves my bones.” His remains have yet to be disturbed, despite requests by archaeologists keen to reveal what killed him.

This story was adapted from: http://www.history.com/topics/british-history/william-shakespeare