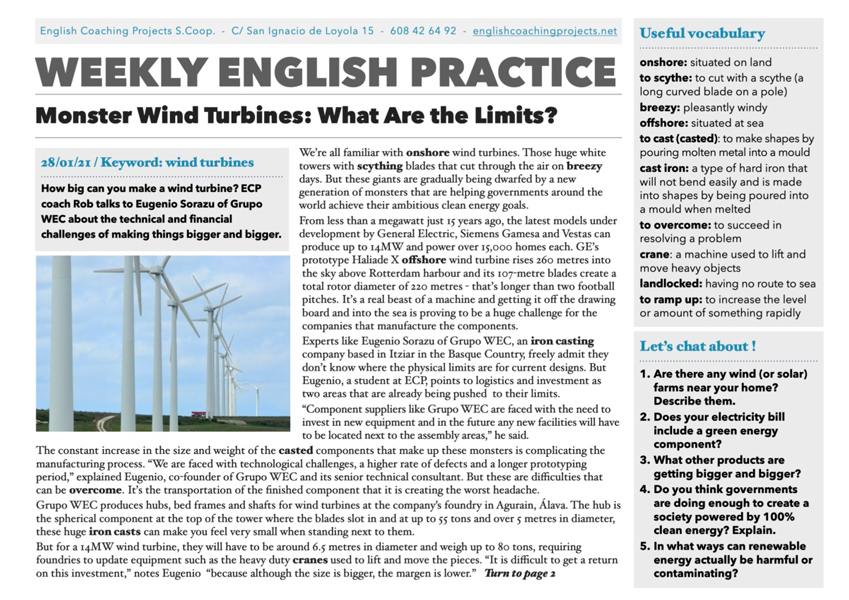 Monster Wind Turbines: What Are the Limits?

How big can you make wind turbines? ECP coach Rob talks to Eugenio Sorazu of Grupo WEC about the technical and financial challenges of making things bigger and bigger.

to scythe: to cut with a scythe (a long curved blade on a pole)

to cast (casted): to make shapes by pouring molten metal into a mould

cast iron: a type of hard iron that will not bend easily and is made into shapes by being poured into a mould when melted

to overcome: to succeed in resolving a problem

crane: a machine used to lift and move heavy objects

landlocked: having no route to sea

to ramp up: to increase the level or amount of something rapidly

How big can you make a wind turbine? ECP coach Rob talks to Eugenio Sorazu of Grupo WEC about the technical and financial challenges of making things bigger and bigger.

We’re all familiar with onshore wind turbines. Those huge white towers with scything blades that cut through the air on breezy days. But these giants are gradually being dwarfed by a new generation of monsters that are helping governments around the world achieve their ambitious clean energy goals.

From less than a megawatt just 15 years ago, the latest models under development by General Electric, Siemens Gamesa and Vestas can produce up to 14MW and power over 15,000 homes each. GE’s prototype Haliade X offshore wind turbine rises 260 metres into the sky above Rotterdam harbour and its 107-metre blades create a total rotor diameter of 220 metres – that’s longer than two football pitches. It’s a real beast of a machine and getting it off the drawing board and into the sea is proving to be a huge challenge for the companies that manufacture the components.

Experts like Eugenio Sorazu of Grupo WEC, an iron casting company based in Itziar in the Basque Country, freely admit they don’t know where the physical limits are for current designs. But Eugenio, a student at ECP, points to logistics and investment as two areas that are already being pushed  to their limits.

“Component suppliers like Grupo WEC are faced with the need to invest in new equipment and in the future any new facilities will have to be located next to the assembly areas,” he said.

The constant increase in the size and weight of the casted components that make up these monsters is complicating the manufacturing process. “We are faced with technological challenges, a higher rate of defects and a longer prototyping period,” explained Eugenio, co-founder of Grupo WEC and its senior technical consultant. But these are difficulties that can be overcome. It’s the transportation of the finished component that it is creating the worst headache.

Grupo WEC produces hubs, bed frames and shafts for wind turbines at the company’s foundry in Agurain, Álava. The hub is the spherical component at the top of the tower where the blades slot in and at up to 55 tons and over 5 metres in diameter, these huge iron casts can make you feel very small when standing next to them.

But for a 14MW wind turbine, they will have to be around 6.5 metres in diameter and weigh up to 80 tons, requiring foundries to update equipment such as the heavy duty cranes used to lift and move the pieces. “It is difficult to get a return on this investment,” notes Eugenio  “because although the size is bigger, the margen is lower.”

“But the immediate problem,” he continued, “is that the maximum height for transport along roads, through tunnels and under bridges is 5.5 metres.” That means current facilities are in danger of producing landlocked components for offshore machines that are assembled at coastal ports.

Ramping up offshore wind energy production is essential to accelerating the global energy transition. The cost of offshore electricity generation has fallen by more than 66% since 2012, making it cheaper to build wind farms than new fossil-fuel power plants.

But component suppliers are struggling to keep up with demand. Governments, private investors and established companies need to develop a common strategy to secure the future of the sector and maintain that drive towards a society powered by clean, renewable energy.