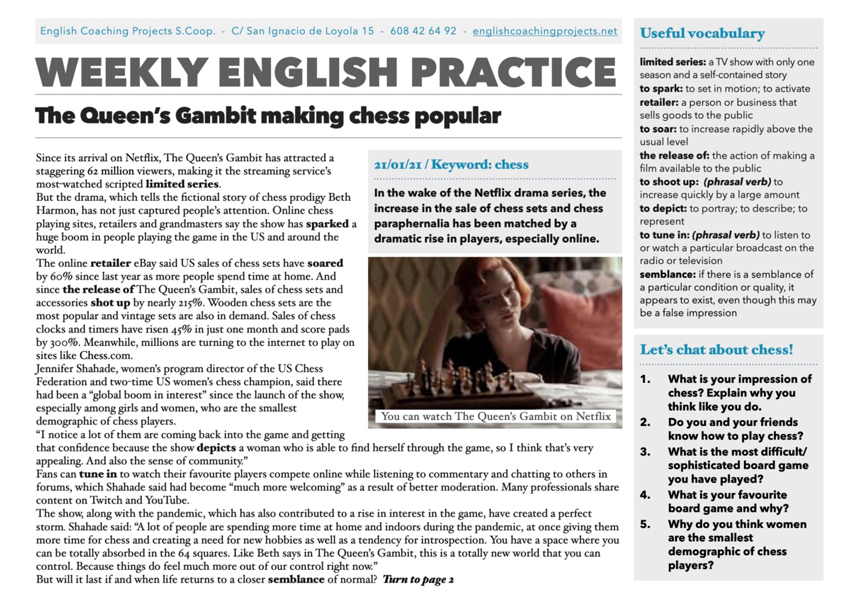 In the wake of the Netflix drama series, the increase in the sale of chess sets and paraphernalia has been matched by a dramatic rise in players, especially online.

limited series: a TV show with only one season and a self-contained story

to spark: to set in motion; to activate

retailer: a person or business that sells goods to the public

to soar: to increase rapidly above the usual level

the release of: the action of making a film available to the public

to shoot up:  (phrasal verb) to increase quickly by a large amount

to depict: to portray; to describe; to represent

to tune in: (phrasal verb) to listen to or watch a particular broadcast on the radio or television

semblance: if there is a semblance of a particular condition or quality, it appears to exist, even though this may be a false impression

In the wake of the Netflix drama series, the increase in the sale of chess sets and chess paraphernalia has been matched by a dramatic rise in players, especially online.

Since its arrival on Netflix, The Queen’s Gambit has attracted a staggering 62 million viewers, making it the streaming service’s most-watched scripted limited series.

But the drama, which tells the fictional story of chess prodigy Beth Harmon, has not just captured people’s attention. Online chess playing sites, retailers and grandmasters say the show has sparked a huge boom in people playing the game in the US and around the world.

The online retailer eBay said US sales of chess sets have soared by 60% since last year as more people spend time at home. And since the release of The Queen’s Gambit, sales of chess sets and accessories shot up by nearly 215%. Wooden chess sets are the most popular and vintage sets are also in demand. Sales of chess clocks and timers have risen 45% in just one month and score pads by 300%. Meanwhile, millions are turning to the internet to play on sites like Chess.com.

Jennifer Shahade, women’s program director of the US Chess Federation and two-time US women’s chess champion, said there had been a “global boom in interest” since the launch of the show, especially among girls and women, who are the smallest demographic of chess players.

“I notice a lot of them are coming back into the game and getting that confidence because the show depicts a woman who is able to find herself through the game, so I think that’s very appealing. And also the sense of community.”

Fans can tune in to watch their favourite players compete online while listening to commentary and chatting to others in forums, which Shahade said had become “much more welcoming” as a result of better moderation. Many professionals share content on Twitch and YouTube.

The show, along with the pandemic, which has also contributed to a rise in interest in the game, have created a perfect storm. Shahade said: “A lot of people are spending more time at home and indoors during the pandemic, at once giving them more time for chess and creating a need for new hobbies as well as a tendency for introspection. You have a space where you can be totally absorbed in the 64 squares. Like Beth says in The Queen’s Gambit, this is a totally new world that you can control. Because things do feel much more out of our control right now.”

But will it last if and when life returns to a closer semblance of normal?

The hope is that people are going to learn the basics of chess during this time and then, when things open up more and there are big tournaments, they will be encouraged to go and experience the in-person tournaments that are featured in the show.

Why I Love The Wire

‘Atypical’ is both wonderful and disappointing