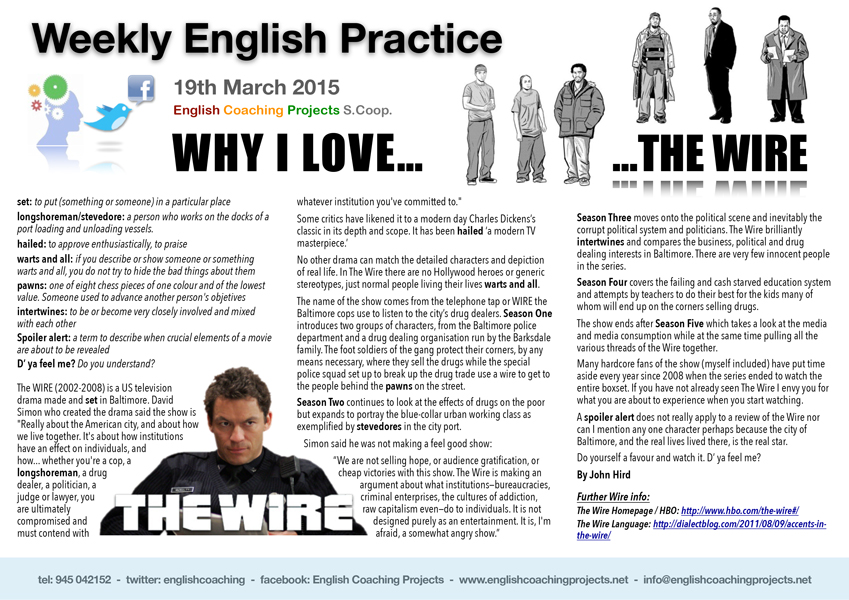 set: to put (something or someone) in a particular place

longshoreman/stevedore: a person who works on the docks of a port loading and unloading vessels.

hailed: to approve enthusiastically, to praise

warts and all: if you describe or show someone or something warts and all, you do not try to hide the bad things about them

pawns: one of eight chess pieces of one colour and of the lowest value. Someone used to advance another person’s objetives

intertwines: to be or become very closely involved and mixed with each other

Spoiler alert: a term to describe when crucial elements of a movie are about to be revealed

D’ ya feel me? Do you understand?

The WIRE (2002-2008) is a US television drama made and set in Baltimore. David Simon who created the drama said the show is “Really about the American city, and about how we live together. It’s about how institutions have an effect on individuals, and how… whether you’re a cop, a longshoreman, a drug dealer, a politician, a judge or lawyer, you are ultimately compromised and must contend with whatever institution you’ve committed to.”

Some critics have likened it to a modern day Charles Dickens’s classic in its depth and scope. It has been hailed ‘a modern TV masterpiece.’

No other drama can match the detailed characters and depiction of real life. In The Wire there are no Hollywood heroes or generic stereotypes, just normal people living their lives warts and all.

The name of the show comes from the telephone tap or WIRE the Baltimore cops use to listen to the city’s drug dealers. Season One introduces two groups of characters, from the Baltimore police department and a drug dealing organisation run by the Barksdale family. The foot soldiers of the gang protect their corners, by any means necessary, where they sell the drugs while the special police squad set up to break up the drug trade use a wire to get to the people behind the pawns on the street.

Season Two continues to look at the effects of drugs on the poor but expands to portray the blue-collar urban working class as exemplified by stevedores in the city port.

Simon said he was not making a feel good show:

“We are not selling hope, or audience gratification, or cheap victories with this show. The Wire is making an argument about what institutions—bureaucracies, criminal enterprises, the cultures of addiction, raw capitalism even—do to individuals. It is not designed purely as an entertainment. It is, I’m afraid, a somewhat angry show.”

Season Three moves onto the political scene and inevitably the corrupt political system and politicians. The Wire brilliantly intertwines and compares the business, political and drug dealing interests in Baltimore. There are very few innocent people in the series.

Season Four covers the failing and cash starved education system and attempts by teachers to do their best for the kids many of whom will end up on the corners selling drugs.

The show ends after Season Five which takes a look at the media and media consumption while at the same time pulling all the various threads of the Wire together.

Many hardcore fans of the show (myself included) have put time aside every year since 2008 when the series ended to watch the entire boxset. If you have not already seen The Wire I envy you for what you are about to experience when you start watching.

A spoiler alert does not really apply to a review of the Wire nor can I mention any one character perhaps because the city of Baltimore, and the real lives lived there, is the real star.

Do yourself a favour and watch it. D’ ya feel me?