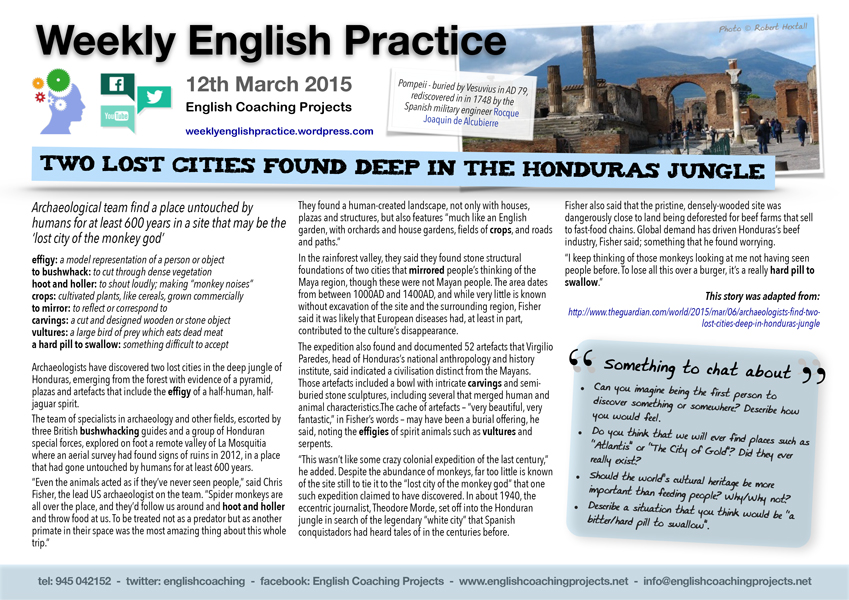 effigy: a model representation of a person or object

to bushwhack: to cut through dense vegetation

to mirror: to reflect or correspond to

carvings: a cut and designed wooden or stone object

vultures: a large bird of prey which eats dead meat

a hard pill to swallow: something difficult to accept

Archaeologists have discovered two lost cities in the deep jungle of Honduras, emerging from the forest with evidence of a pyramid, plazas and artefacts that include the effigy of a half-human, half-jaguar spirit.

The team of specialists in archaeology and other fields, escorted by three British bushwhacking guides and a group of Honduran special forces, explored on foot a remote valley of La Mosquitia where an aerial survey had found signs of ruins in 2012, in a place that had gone untouched by humans for at least 600 years.

“Even the animals acted as if they’ve never seen people,” said Chris Fisher, the lead US archaeologist on the team. “Spider monkeys are all over the place, and they’d follow us around and hoot and holler and throw food at us. To be treated not as a predator but as another primate in their space was the most amazing thing about this whole trip.”

They found a human-created landscape, not only with houses, plazas and structures, but also features “much like an English garden, with orchards and house gardens, fields of crops, and roads and paths.”

In the rainforest valley, they said they found stone structural foundations of two cities that mirrored people’s thinking of the Maya region, though these were not Mayan people. The area dates from between 1000AD and 1400AD, and while very little is known without excavation of the site and the surrounding region, Fisher said it was likely that European diseases had, at least in part, contributed to the culture’s disappearance.

The expedition also found and documented 52 artefacts that Virgilio Paredes, head of Honduras’s national anthropology and history institute, said indicated a civilisation distinct from the Mayans. Those artefacts included a bowl with intricate carvings and semi-buried stone sculptures, including several that merged human and animal characteristics.The cache of artefacts – “very beautiful, very fantastic,” in Fisher’s words – may have been a burial offering, he said, noting the effigies of spirit animals such as vultures and serpents.

“This wasn’t like some crazy colonial expedition of the last century,” he added. Despite the abundance of monkeys, far too little is known of the site still to tie it to the “lost city of the monkey god” that one such expedition claimed to have discovered. In about 1940, the eccentric journalist, Theodore Morde, set off into the Honduran jungle in search of the legendary “white city” that Spanish conquistadors had heard tales of in the centuries before.

Fisher also said that the pristine, densely-wooded site was dangerously close to land being deforested for beef farms that sell to fast-food chains. Global demand has driven Honduras’s beef industry, Fisher said; something that he found worrying.

“I keep thinking of those monkeys looking at me not having seen people before. To lose all this over a burger, it’s a really hard pill to swallow.”

This story was adapted from: http://www.theguardian.com/world/2015/mar/06/archaeologists-find-two-lost-cities-deep-in-honduras-jungle