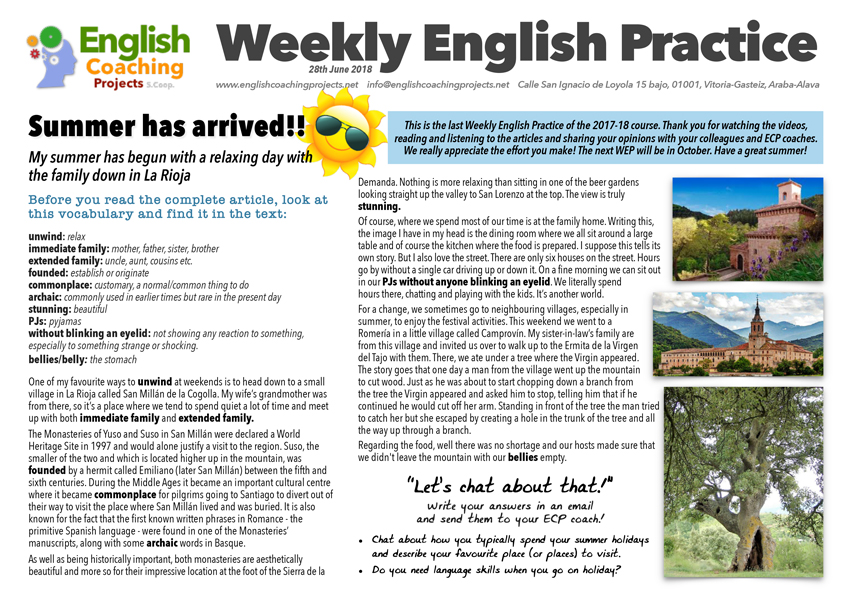 commonplace: customary, a normal/common thing to do

archaic: commonly used in earlier times but rare in the present day

without blinking an eyelid: not showing any reaction to something, especially to something strange or shocking.

One of my favourite ways to unwind at weekends is to head down to a small village in La Rioja called San Millán de la Cogolla. My wife’s grandmother was from there, so it’s a place where we tend to spend quiet a lot of time and meet up with both immediate family and extended family.

The Monasteries of Yuso and Suso in San Millán were declared a World Heritage Site in 1997 and would alone justify a visit to the region. Suso, the smaller of the two and which is located higher up in the mountain, was founded by a hermit called Emiliano (later San Millán) between the fifth and sixth centuries. During the Middle Ages it became an important cultural centre where it became commonplace for pilgrims going to Santiago to divert out of their way to visit the place where San Millán lived and was buried. It is also known for the fact that the first known written phrases in Romance – the primitive Spanish language – were found in one of the Monasteries’ manuscripts, along with some archaic words in Basque.

As well as being historically important, both monasteries are aesthetically beautiful and more so for their impressive location at the foot of the Sierra de la Demanda. Nothing is more relaxing than sitting in one of the beer gardens looking straight up the valley to San Lorenzo at the top. The view is truly stunning.

Of course, where we spend most of our time is at the family home. Writing this, the image I have in my head is the dining room where we all sit around a large table and of course the kitchen where the food is prepared. I suppose this tells its own story. But I also love the street. There are only six houses on the street. Hours go by without a single car driving up or down it. On a fine morning we can sit out in our PJs without anyone blinking an eyelid. We literally spend hours there, chatting and playing with the kids. It’s another world.

For a change, we sometimes go to neighbouring villages, especially in summer, to enjoy the festival activities. This weekend we went to a Romería in a little village called Camprovín. My sister-in-law’s family are from this village and invited us over to walk up to the Ermita de la Virgen del Tajo with them. There, we ate under a tree where the Virgin appeared. The story goes that one day a man from the village went up the mountain to cut wood. Just as he was about to start chopping down a branch from the tree the Virgin appeared and asked him to stop, telling him that if he continued he would cut off her arm. Standing in front of the tree the man tried to catch her but she escaped by creating a hole in the trunk of the tree and all the way up through a branch.

Regarding the food, well there was no shortage and our hosts made sure that we didn’t leave the mountain with our bellies empty.