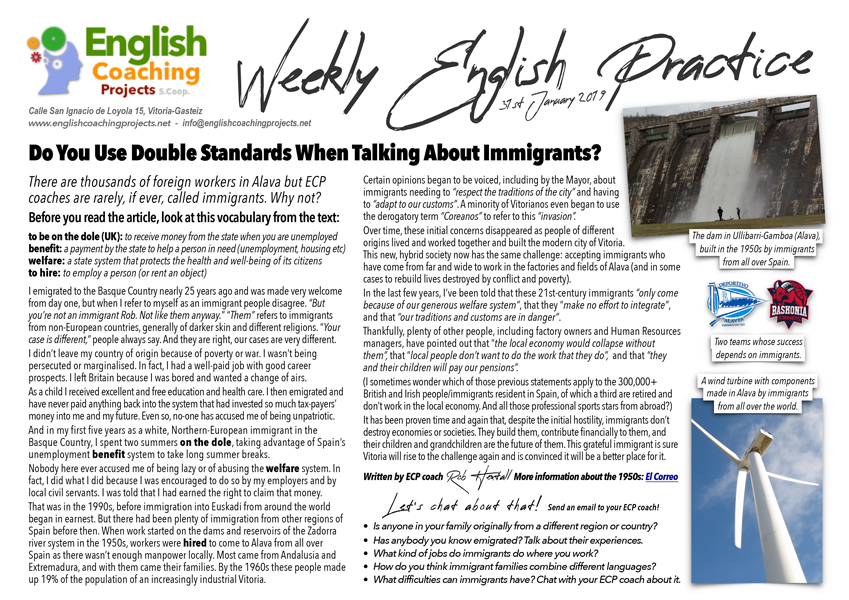 In this week’s Weekly English Practice, ECP coach Rob talks about immigration in Vitoria and Alava and asks why people call him and his ECP colleagues ‘foreigners’ when they use the word ‘immigrants’ for people from non-European countries.

There are thousands of foreign workers in Alava but ECP coaches are rarely, if ever, called immigrants. Why not?

Before you read the article, look at this vocabulary from the text:

to be on the dole (UK): to receive money from the state when you are unemployed

benefit: a payment by the state to help a person in need (unemployment, housing etc)

welfare: a state system that protects the health and well-being of its citizens

to hire: to employ a person (or rent an object)

I emigrated to the Basque Country nearly 25 years ago and was made very welcome from day one, but when I refer to myself as an immigrant people disagree. “But you’re not an immigrant Rob. Not like them anyway.” “Them” refers to immigrants from non-European countries, generally of darker skin and different religions. “Your case is different,” people always say. And they are right, our cases are very different.

I didn’t leave my country of origin because of poverty or war. I wasn’t being persecuted or marginalised. In fact, I had a well-paid job with good career prospects. I left Britain because I was bored and wanted a change of airs.

As a child I received excellent and free education and health care. I then emigrated and have never paid anything back into the system that had invested so much tax-payers’ money into me and my future. Even so, no-one has accused me of being unpatriotic.

And in my first five years as a white, Northern-European immigrant in the Basque Country, I spent two summers on the dole, taking advantage of Spain’s unemployment benefit system to take long summer breaks.

Nobody here ever accused me of being lazy or of abusing the welfare system. In fact, I did what I did because I was encouraged to do so by my employers and by local civil servants. I was told that I had earned the right to claim that money.

That was in the 1990s, before immigration into Euskadi from around the world began in earnest. But there had been plenty of immigration from other regions of Spain before then. When work started on the dams and reservoirs of the Zadorra river system in the 1950s, workers were hired to come to Alava from all over Spain as there wasn’t enough manpower locally. Most came from Andalusia and Extremadura, and with them came their families. By the 1960s these people made up 19% of the population of an increasingly industrial Vitoria.

Certain opinions began to be voiced, including by the Mayor, about immigrants needing to “respect the traditions of the city” and having to “adapt to our customs”. A minority of Vitorianos even began to use the derogatory term “Coreanos” to refer to this “invasion”.

Over time, these initial concerns disappeared as people of different origins lived and worked together and built the modern city of Vitoria. This new, hybrid society now has the same challenge: accepting immigrants who have come from far and wide to work in the factories and fields of Alava (and in some cases to rebuild lives destroyed by conflict and poverty).

In the last few years, I’ve been told that these 21st-century immigrants “only come because of our generous welfare system”, that they “make no effort to integrate”, and that “our traditions and customs are in danger”.

Thankfully, plenty of other people, including factory owners and Human Resources managers, have pointed out that “the local economy would collapse without them”, that “local people don’t want to do the work that they do”,  and that “they and their children will pay our pensions”.

(I sometimes wonder which of those previous statements apply to the 300,000+ British and Irish people/immigrants resident in Spain, of which a third are retired and don’t work in the local economy. And all those professional sports stars from abroad?)

It has been proven time and again that, despite the initial hostility, immigrants don’t destroy economies or societies. They build them, contribute financially to them, and their children and grandchildren are the future of them. This grateful immigrant is sure Vitoria will rise to the challenge again and is convinced it will be a better place for it.

Write your opinions in an email and send it to your ECP coach!