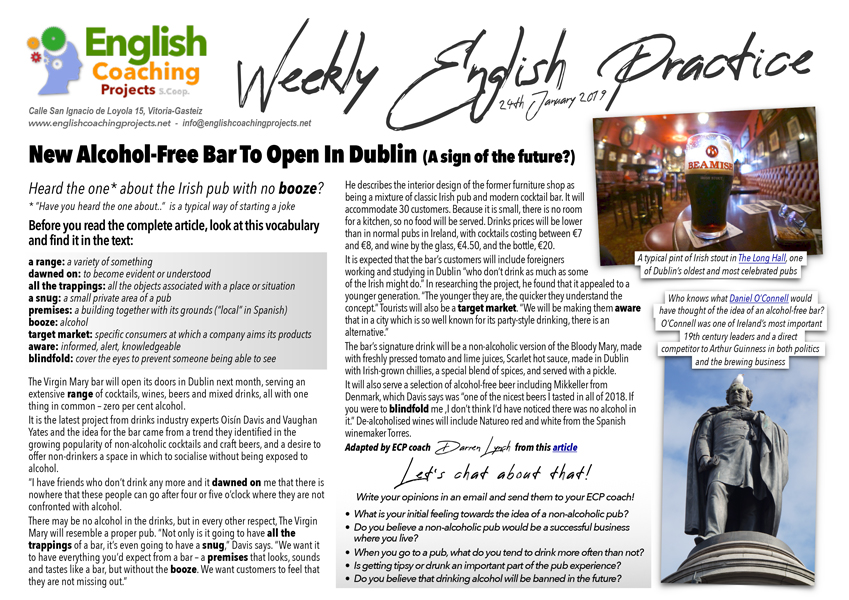 ECP coach Darren talks about Dublin’s newest pub, The Virgin Mary. What makes this bar different is that it only serves alcohol-free drinks. To find out more, read this week’s Weekly English Practice!

Heard the one* about the Irish pub with no booze?

* ”Have you heard the one about..”  is a typical way of starting a joke

Before you read and listen to the complete article, look at this vocabulary and find it in the text:

a range: a variety of something

dawned on: to become evident or understood

all the trappings: all the objects associated with a place or situation

a snug: a small private area of a pub

premises: a building together with its grounds (“local” in Spanish)

target market: specific consumers at which a company aims its products

blindfold: cover the eyes to prevent someone being able to see

The Virgin Mary bar will open its doors in Dublin next month, serving an extensive range of cocktails, wines, beers and mixed drinks, all with one thing in common – zero per cent alcohol.

It is the latest project from drinks industry experts Oisín Davis and Vaughan Yates and the idea for the bar came from a trend they identified in the growing popularity of non-alcoholic cocktails and craft beers, and a desire to offer non-drinkers a space in which to socialise without being exposed to alcohol.

“I have friends who don’t drink any more and it dawned on me that there is nowhere that these people can go after four or five o’clock where they are not confronted with alcohol.

There may be no alcohol in the drinks, but in every other respect, The Virgin Mary will resemble a proper pub. “Not only is it going to have all the trappings of a bar, it’s even going to have a snug,” Davis says. “We want it to have everything you’d expect from a bar – a premises that looks, sounds and tastes like a bar, but without the booze. We want customers to feel that they are not missing out.”

He describes the interior design of the former furniture shop as being a mixture of classic Irish pub and modern cocktail bar. It will accommodate 30 customers. Because it is small, there is no room for a kitchen, so no food will be served. Drinks prices will be lower than in normal pubs in Ireland, with cocktails costing between €7 and €8, and wine by the glass, €4.50, and the bottle, €20.

It is expected that the bar’s customers will include foreigners working and studying in Dublin “who don’t drink as much as some of the Irish might do.” In researching the project, he found that it appealed to a younger generation. “The younger they are, the quicker they understand the concept.” Tourists will also be a target market. “We will be making them aware that in a city which is so well known for its party-style drinking, there is an alternative.”

The bar’s signature drink will be a non-alcoholic version of the Bloody Mary, made with freshly pressed tomato and lime juices, Scarlet hot sauce, made in Dublin with Irish-grown chillies, a special blend of spices, and served with a pickle.

It will also serve a selection of alcohol-free beer including Mikkeller from Denmark, which Davis says was “one of the nicest beers I tasted in all of 2018. If you were to blindfold me ,I don’t think I’d have noticed there was no alcohol in it.” De-alcoholised wines will include Natureo red and white from the Spanish winemaker Torres.

Adapted by ECP coach Darren Lynch from this article