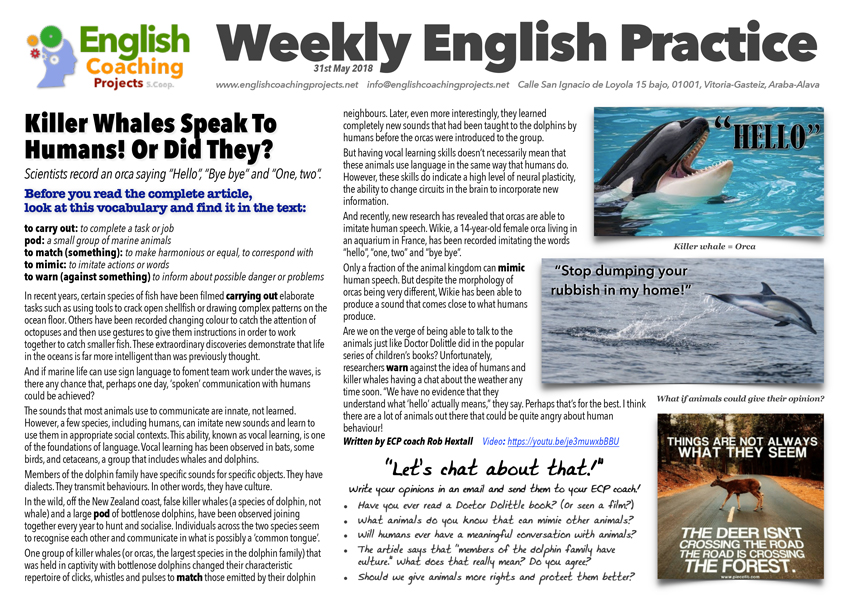 to carry out: to complete a task or job

to match (something): to make harmonious or equal, to correspond with

to mimic: to imitate actions or words

to warn (against something) to inform about possible danger or problems

In recent years, certain species of fish have been filmed carrying out elaborate tasks such as using tools to crack open shellfish or drawing complex patterns on the ocean floor. Others have been recorded changing colour to catch the attention of octopuses and then use gestures to give them instructions in order to work together to catch smaller fish. These extraordinary discoveries demonstrate that life in the oceans is far more intelligent than was previously thought.

And if marine life can use sign language to foment teamwork under the waves, is there any chance that, perhaps one day, ‘spoken’ communication with humans could be achieved?

The sounds that most animals use to communicate are innate, not learned. However, a few species, including humans, can imitate new sounds and learn to use them in appropriate social contexts. This ability, known as vocal learning, is one of the foundations of language. Vocal learning has been observed in bats, some birds, and cetaceans, a group that includes whales and dolphins.

Members of the dolphin family have specific sounds for specific objects. They have dialects. They transmit behaviours. In other words, they have culture.

In the wild, off the New Zealand coast, false killer whales (a species of dolphin, not whale) and a large pod of bottlenose dolphins, have been observed joining together every year to hunt and socialise. Individuals across the two species seem to recognise each other and communicate in what is possibly a ‘common tongue’.

One group of killer whales (or orcas, the largest species in the dolphin family) that was held in captivity with bottlenose dolphins changed their characteristic repertoire of clicks, whistles and pulses to match those emitted by their dolphin neighbours. Later, even more interestingly, they learned completely new sounds that had been taught to the dolphins by humans before the orcas were introduced to the group.

But having vocal learning skills doesn’t necessarily mean that these animals use language in the same way that humans do. However, these skills do indicate a high level of neural plasticity, the ability to change circuits in the brain to incorporate new information.

And recently, new research has revealed that orcas are able to imitate human speech. Wikie, a 14-year-old female orca living in an aquarium in France, has been recorded imitating the words “hello”, “one, two” and “bye bye”.

Only a fraction of the animal kingdom can mimic human speech. But despite the morphology of orcas being very different, Wikie has been able to produce a sound that comes close to what humans produce.

Are we on the verge of being able to talk to the animals just like Doctor Dolittle did in the popular series of children’s books? Unfortunately, researchers warn against the idea of humans and killer whales having a chat about the weather any time soon. “We have no evidence that they understand what ‘hello’ actually means,” they say. Perhaps that’s for the best. I think there are a lot of animals out there that could be quite angry about human behaviour!