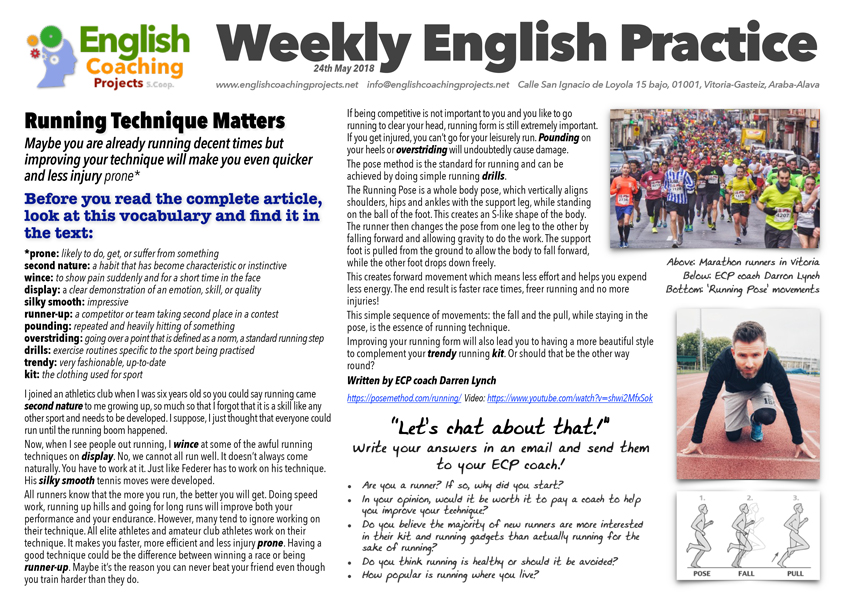 *prone: likely to do, get, or suffer from something

second nature: a habit that has become characteristic or instinctive

wince: to show pain suddenly and for a short time in the face

display: a clear demonstration of an emotion, skill, or quality

runner-up: a competitor or team taking second place in a contest

pounding: repeated and heavily hitting of something

overstriding: going over a point that is defined as a norm, a standard running step

drills: exercise routines specific to the sport being practised

kit: the clothing used for sport

I joined an athletics club when I was six years old so you could say running came second nature to me growing up, so much so that I forgot that it is a skill like any other sport and needs to be developed. I suppose, I just thought that everyone could run until the running boom happened.

Now, when I see people out running, I wince at some of the awful running techniques on display. No, we cannot all run well. It doesn’t always come naturally. You have to work at it. Just like Federer has to work on his technique. His silky smooth tennis moves were developed.

All runners know that the more you run, the better you will get. Doing speed work, running up hills and going for long runs will improve both your performance and your endurance. However, many tend to ignore working on their technique. All elite athletes and amateur club athletes work on their technique. It makes you faster, more efficient and less injury prone. Having a good technique could be the difference between winning a race or being runner-up. Maybe it’s the reason you can never beat your friend even though you train harder than they do.

If being competitive is not important to you and you like to go running to clear your head, running form is still extremely important. If you get injured, you can’t go for your leisurely run. Pounding on your heels or overstriding will undoubtedly cause damage.

The pose method is the standard for running and can be achieved by doing simple running drills.

The Running Pose is a whole body pose, which vertically aligns shoulders, hips and ankles with the support leg, while standing on the ball of the foot. This creates an S-like shape of the body. The runner then changes the pose from one leg to the other by falling forward and allowing gravity to do the work. The support foot is pulled from the ground to allow the body to fall forward, while the other foot drops down freely.

This simple sequence of movements: the fall and the pull, while staying in the pose, is the essence of running technique.

Improving your running form will also lead you to having a more beautiful style to complement your trendy running kit. Or should that be the other way round?