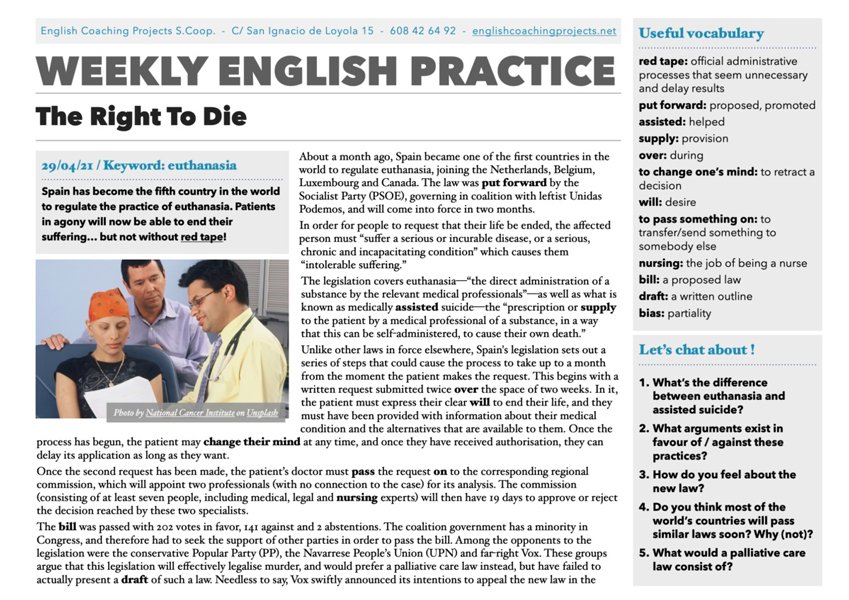 The Right To Die

Spain has become the fifth country in the world to regulate the practice of euthanasia. Patients in agony will now be able to end their suffering… but not without red tape!

to change one’s mind: to retract a decision

to pass something on: to transfer/send something to somebody else

nursing: the job of being a nurse

Spain has become the fifth country in the world to regulate the practice of euthanasia. Patients in agony will now be able to end their suffering… but not without red tape!

About a month ago, Spain became one of the first countries in the world to regulate euthanasia, joining the Netherlands, Belgium, Luxembourg and Canada. The law was put forward by the Socialist Party (PSOE), governing in coalition with leftist Unidas Podemos, and will come into force in two months.

In order for people to request that their life be ended, the affected person must “suffer a serious or incurable disease, or a serious, chronic and incapacitating condition” which causes them “intolerable suffering.”

Unlike other laws in force elsewhere, Spain’s legislation sets out a series of steps that could cause the process to take up to a month from the moment the patient makes the request. This begins with a written request submitted twice over the space of two weeks. In it, the patient must express their clear will to end their life, and they must have been provided with information about their medical condition and the alternatives that are available to them. Once the process has begun, the patient may change their mind at any time, and once they have received authorisation, they can delay its application as long as they want.

Once the second request has been made, the patient’s doctor must pass the request on to the corresponding regional commission, which will appoint two professionals (with no connection to the case) for its analysis. The commission (consisting of at least seven people, including medical, legal and nursing experts) will then have 19 days to approve or reject the decision reached by these two specialists.

The bill was passed with 202 votes in favor, 141 against and 2 abstentions. The coalition government has a minority in Congress, and therefore had to seek the support of other parties in order to pass the bill. Among the opponents to the legislation were the conservative Popular Party (PP), the Navarrese People’s Union (UPN) and far-right Vox. These groups argue that this legislation will effectively legalise murder, and would prefer a palliative care law instead, but have failed to actually present a draft of such a law. Needless to say, Vox swiftly announced its intentions to appeal the new law in the Constitutional Court, and to repeal it, should the party come to power.

Meanwhile, supporters of the law suspect that biases held by the regional commissions could end up making it difficult to receive the requested assistance in some places, and are sure that their work on this issue is not yet done.

A family’s fight for a dignified death

Keith Flint of The Prodigy Dies