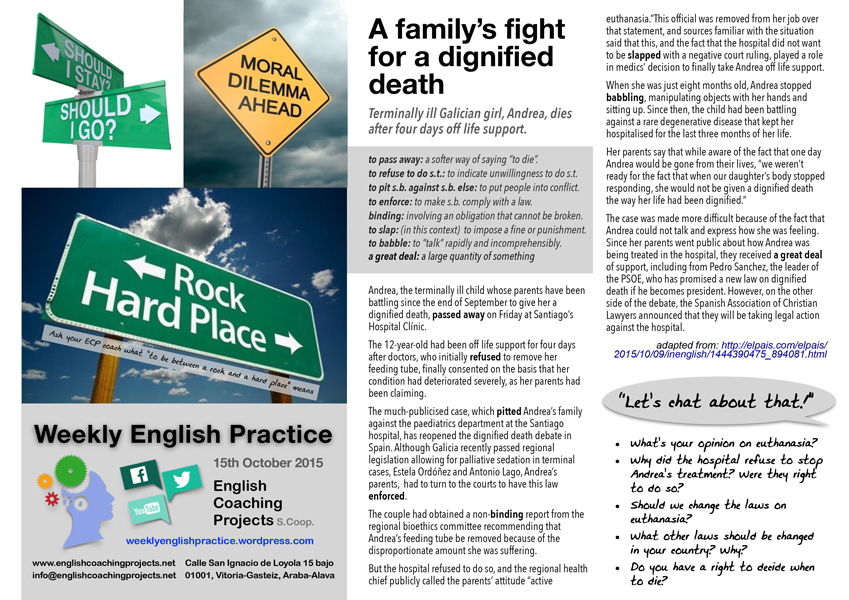 A family’s fight for a dignified death

to pass away: a softer way of saying “to die”.

to refuse to do s.t.: to indicate unwillingness to do s.t.

to pit s.b. against s.b. else: to put people into conflict.

to enforce: to make s.b. comply with a law.

binding: involving an obligation that cannot be broken.

to slap: (in this context) to impose a fine or punishment.

to babble: to “talk” rapidly and incomprehensibly.

a great deal: a large quantity of something

Andrea, the terminally ill child whose parents have been battling since the end of September to give her a dignified death, passed away on Friday at Santiago’s Hospital Clínic.

The 12-year-old had been off life support for four days after doctors, who initially refused to remove her feeding tube, finally consented on the basis that her condition had deteriorated severely, as her parents had been claiming.

The much-publicised case, which pitted Andrea’s family against the paediatrics department at the Santiago hospital, has reopened the dignified death debate in Spain. Although Galicia recently passed regional legislation allowing for palliative sedation in terminal cases, Estela Ordóñez and Antonio Lago, Andrea’s parents, had to turn to the courts to have this law enforced.

The couple had obtained a non-binding report from the regional bioethics committee recommending that Andrea’s feeding tube be removed because of the disproportionate amount she was suffering.

But the hospital refused to do so, and the regional health chief publicly called the parents’ attitude “active euthanasia.” This official was removed from her job over that statement, and sources familiar with the situation said that this, and the fact that the hospital did not want to be slapped with a negative court ruling, played a role in medics’ decision to finally take Andrea off life support.

When she was just eight months old, Andrea stopped babbling, manipulating objects with her hands and sitting up. Since then, the child had been battling against a rare degenerative disease that kept her hospitalised for the last three months of her life.

Her parents say that while aware of the fact that one day Andrea would be gone from their lives, “we weren’t ready for the fact that when our daughter’s body stopped responding, she would not be given a dignified death the way her life had been dignified.”

The case was made more difficult because of the fact that Andrea could not talk and express how she was feeling. Since her parents went public about how Andrea was being treated in the hospital, they received a great deal of support, including from Pedro Sanchez, the leader of the PSOE, who has promised a new law on dignified death if he becomes president. However, on the other side of the debate, the Spanish Association of Christian Lawyers announced that they will be taking legal action against the hospital.