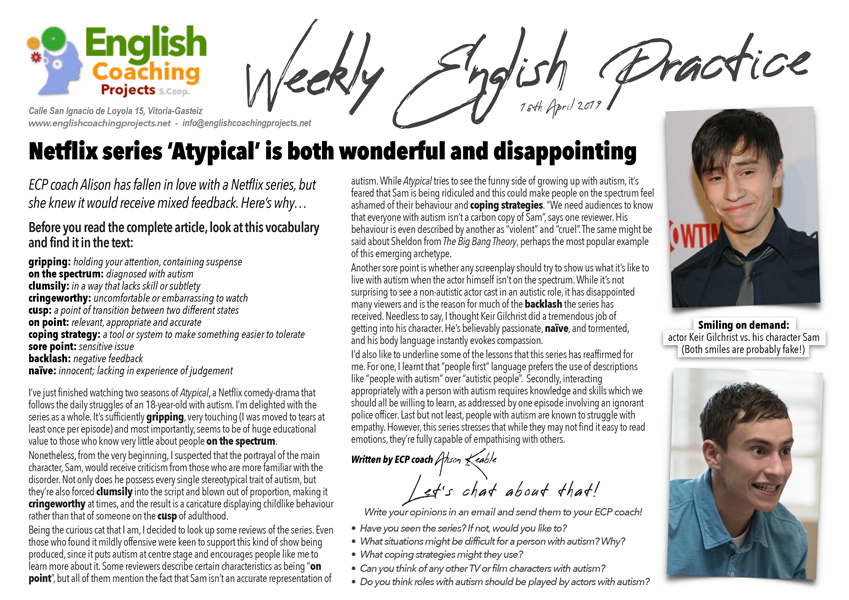 ECP coach Alison talks about one of her favourite series, ‘Atypical’, and how it portrays people with autism

ECP coach Alison has fallen in love with a Netflix series, but she knew it would receive mixed feedback. Here’s why…

on the spectrum: diagnosed with autism

clumsily: in a way that lacks skill or subtlety

cringeworthy: uncomfortable or embarrassing to watch

cusp: a point of transition between two different states

on point: relevant, appropriate and accurate

coping strategy: a tool or system to make something easier to tolerate

I’ve just finished watching two seasons of Atypical, a Netflix comedy-drama that follows the daily struggles of an 18-year-old with autism. I’m delighted with the series as a whole. It’s sufficiently gripping, very touching (I was moved to tears at least once per episode) and most importantly, seems to be of huge educational value to those who know very little about people on the spectrum.

Nonetheless, from the very beginning, I suspected that the portrayal of the main character, Sam, would receive criticism from those who are more familiar with the disorder. Not only does he possess every single stereotypical trait of autism, but they’re also forced clumsily into the script and blown out of proportion, making it cringeworthy at times, and the result is a caricature displaying childlike behaviour rather than that of someone on the cusp of adulthood.

Being the curious cat that I am, I decided to look up some reviews of the series. Even those who found it mildly offensive were keen to support this kind of show being produced, since it puts autism at centre stage and encourages people like me to learn more about it. Some reviewers describe certain characteristics as being “on point”, but all of them mention the fact that Sam isn’t an accurate representation of autism. While Atypical tries to see the funny side of growing up with autism, it’s feared that Sam is being ridiculed and this could make people on the spectrum feel ashamed of their behaviour and coping strategies. “We need audiences to know that everyone with autism isn’t a carbon copy of Sam”, says one reviewer. His behaviour is even described by another as “violent” and “cruel”. The same might be said about Sheldon from The Big Bang Theory, perhaps the most popular example of this emerging archetype.

Another sore point is whether any screenplay should try to show us what it’s like to live with autism when the actor himself isn’t on the spectrum. While it’s not surprising to see a non-autistic actor cast in an autistic role, it has disappointed many viewers and is the reason for much of the backlash the series has received. Needless to say, I thought Keir Gilchrist did a tremendous job of getting into his character. He’s believably passionate, naïve, and tormented, and his body language instantly evokes compassion.

I’d also like to underline some of the lessons that this series has reaffirmed for me. For one, I learnt that “people first” language prefers the use of descriptions like “people with autism” over “autistic people”.  Secondly, interacting appropriately with a person with autism requires knowledge and skills which we should all be willing to learn, as addressed by one episode involving an ignorant police officer. Last but not least, people with autism are known to struggle with empathy. However, this series stresses that while they may not find it easy to read emotions, they’re fully capable of empathising with others.