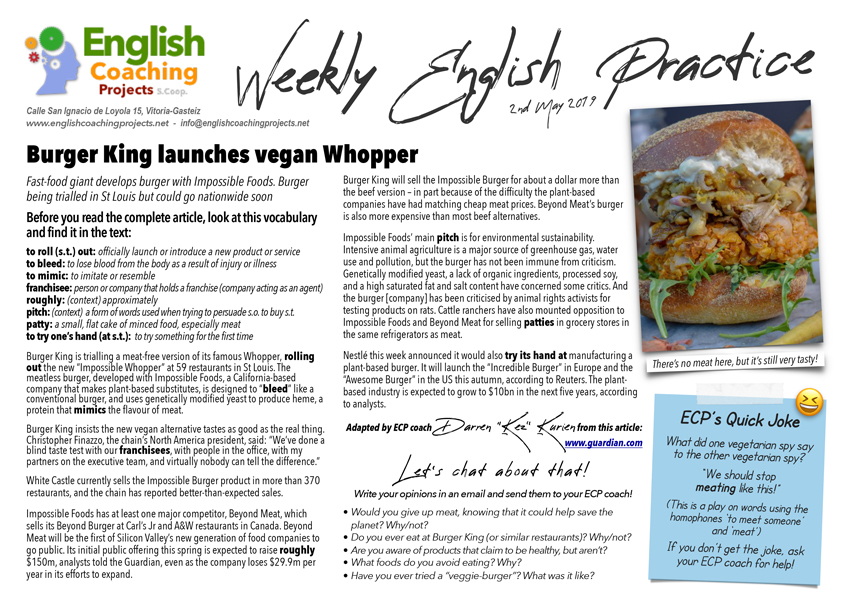 This week’s Weekly English Practice talks about vegan burgers and Burger King’s decision to start selling one in the United States. In the meantime, ECP coach Rob makes himself a burger at home and then talks with his mouth full. Make sure you listen to the quick joke at the end!

to roll (s.t.) out: officially launch or introduce a new product or service

to bleed: to lose blood from the body as a result of injury or illness

to mimic: to imitate or resemble

franchisee: person or company that holds a franchise (company acting as an agent)

pitch: (context)  a form of words used when trying to persuade s.o. to buy s.t.

to try one’s hand (at s.t.):  to try something for the first time

Burger King is trialling a meat-free version of its famous Whopper, rolling out the new “Impossible Whopper” at 59 restaurants in St Louis. The meatless burger, developed with Impossible Foods, a California-based company that makes plant-based substitutes, is designed to “bleed” like a conventional burger, and uses genetically modified yeast to produce heme, a protein that mimics the flavour of meat.

Burger King insists the new vegan alternative tastes as good as the real thing. Christopher Finazzo, the chain’s North America president, said: “We’ve done a blind taste test with our franchisees, with people in the office, with my partners on the executive team, and virtually nobody can tell the difference.”

White Castle currently sells the Impossible Burger product in more than 370 restaurants, and the chain has reported better-than-expected sales.

Impossible Foods has at least one major competitor, Beyond Meat, which sells its Beyond Burger at Carl’s Jr and A&W restaurants in Canada. Beyond Meat will be the first of Silicon Valley’s new generation of food companies to go public. Its initial public offering this spring is expected to raise roughly $150m, analysts told the Guardian, even as the company loses $29.9m per year in its efforts to expand.

Burger King will sell the Impossible Burger for about a dollar more than the beef version – in part because of the difficulty the plant-based companies have had matching cheap meat prices. Beyond Meat’s burger is also more expensive than most beef alternatives.

Impossible Foods’ main pitch is for environmental sustainability. Intensive animal agriculture is a major source of greenhouse gas, water use and pollution, but the burger has not been immune from criticism. Genetically modified yeast, a lack of organic ingredients, processed soy, and a high saturated fat and salt content have concerned some critics. And the burger [company] has been criticised by animal rights activists for testing products on rats. Cattle ranchers have also mounted opposition to Impossible Foods and Beyond Meat for selling patties in grocery stores in the same refrigerators as meat.

Nestlé this week announced it would also try its hand at manufacturing a plant-based burger. It will launch the “Incredible Burger” in Europe and the “Awesome Burger” in the US this autumn, according to Reuters. The plant-based industry is expected to grow to $10bn in the next five years, according to analysts.