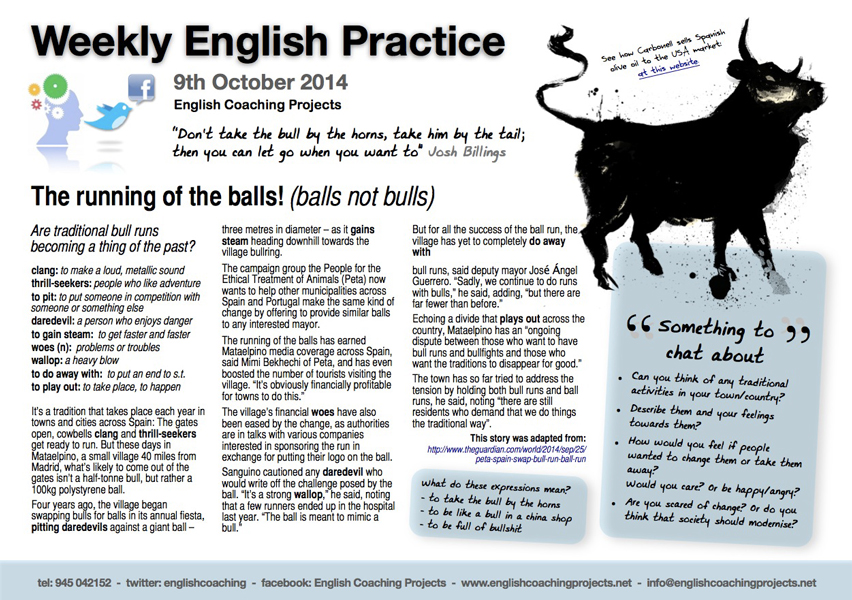 Are traditional bull runs becoming a thing of the past?

to pit: to put someone in competition with someone or something else

daredevil: a person who enjoys danger

to gain steam:  to get faster and faster

to play out: to take place, to happen

It’s a tradition that takes place each year in towns and cities across Spain: The gates open, cowbells clang and thrill-seekers get ready to run. But these days in Mataelpino, a small village 40 miles from Madrid, what’s likely to come out of the gates isn’t a half-tonne bull, but rather a 100kg polystyrene ball.

Four years ago, the village began swapping bulls for balls in its annual fiesta, pitting daredevils against a giant ball – three metres in diameter – as it gains steam heading downhill towards the village bullring.

The campaign group the People for the Ethical Treatment of Animals (Peta) now wants to help other municipalities across Spain and Portugal make the same kind of change by offering to provide similar balls to any interested mayor.

The running of the balls has earned Mataelpino media coverage across Spain, said Mimi Bekhechi of Peta, and has even boosted the number of tourists visiting the village. “It’s obviously financially profitable for towns to do this.”

The village’s financial woes have also been eased by the change, as authorities are in talks with various companies interested in sponsoring the run in exchange for putting their logo on the ball.

Sanguino cautioned any daredevil who would write off the challenge posed by the ball. “It’s a strong wallop,” he said, noting that a few runners ended up in the hospital last year. “The ball is meant to mimic a bull.”

But for all the success of the ball run, the village has yet to completely do away with

bull runs, said deputy mayor José Ángel Guerrero. “Sadly, we continue to do runs with bulls,” he said, adding, “but there are far fewer than before.”

Echoing a divide that plays out across the country, Mataelpino has an “ongoing dispute between those who want to have bull runs and bullfights and those who want the traditions to disappear for good.”

The town has so far tried to address the tension by holding both bull runs and ball runs, he said, noting “there are still residents who demand that we do things the traditional way”.

This story was adapted from: