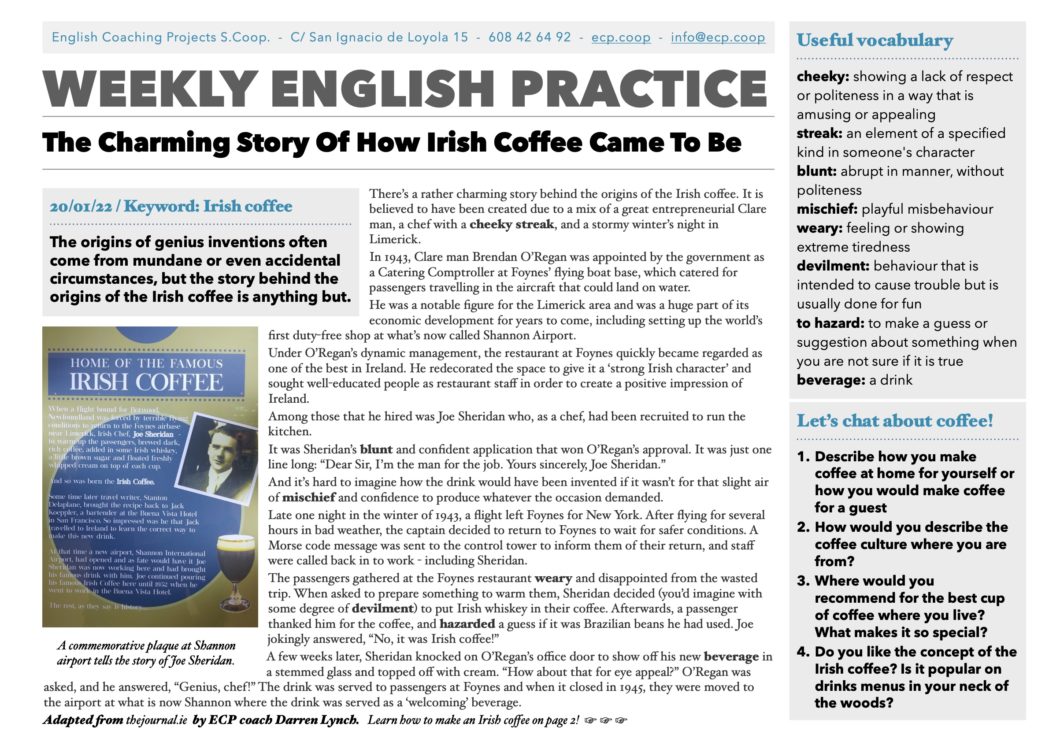 The Charming Story Of How Irish Coffee Came To Be

The origins of genius inventions often come from mundane or even accidental circumstances, but the story behind the origins of the Irish coffee is anything but.

cheeky: showing a lack of respect or politeness in a way that is amusing or appealing

streak: an element of a specified kind in someone’s character

blunt: abrupt in manner, without politeness

devilment: behaviour that is intended to cause trouble but is usually done for fun

to hazard: to make a guess or suggestion about something when you are not sure if it is true

englishcoachingprojects · The Origins Of The Irish Coffee

The origins of genius inventions often come from mundane or even accidental circumstances, but the story behind the origins of the Irish coffee is anything but.

There’s a rather charming story behind the origins of the Irish coffee. It is believed to have been created due to a mix of a great entrepreneurial Clare man, a chef with a cheeky streak, and a stormy winter’s night in Limerick.

In 1943, Clare man Brendan O’Regan was appointed by the government as a Catering Comptroller at Foynes’ flying boat base, which catered for passengers travelling in the aircraft that could land on water.

He was a notable figure for the Limerick area and was a huge part of its economic development for years to come, including setting up the world’s first duty-free shop at what’s now called Shannon Airport.

Under O’Regan’s dynamic management, the restaurant at Foynes quickly became regarded as one of the best in Ireland. He redecorated the space to give it a ‘strong Irish character’ and sought well-educated people as restaurant staff in order to create a positive impression of Ireland.

Among those that he hired was Joe Sheridan who, as a chef, had been recruited to run the kitchen.

It was Sheridan’s blunt and confident application that won O’Regan’s approval. It was just one line long: “Dear Sir, I’m the man for the job. Yours sincerely, Joe Sheridan.”

And it’s hard to imagine how the drink would have been invented if it wasn’t for that slight air of mischief and confidence to produce whatever the occasion demanded.

Late one night in the winter of 1943, a flight left Foynes for New York. After flying for several hours in bad weather, the captain decided to return to Foynes to wait for safer conditions. A Morse code message was sent to the control tower to inform them of their return, and staff were called back in to work – including Sheridan.

The passengers gathered at the Foynes restaurant weary and disappointed from the wasted trip. When asked to prepare something to warm them, Sheridan decided (you’d imagine with some degree of devilment) to put Irish whiskey in their coffee. Afterwards, a passenger thanked him for the coffee, and hazarded a guess if it was Brazilian beans he had used. Joe jokingly answered, “No, it was Irish coffee!”

A few weeks later, Sheridan knocked on O’Regan’s office door to show off his new beverage in a stemmed glass and topped off with cream. “How about that for eye appeal?” O’Regan was asked, and he answered, “Genius, chef!” The drink was served to passengers at Foynes and when it closed in 1945, they were moved to the airport at what is now Shannon where the drink was served as a ‘welcoming’ beverage.

The waste mountain of coffee cups

Leo Varadkar, Gay Son Of Indian Immigrant, To Be Next Irish PM