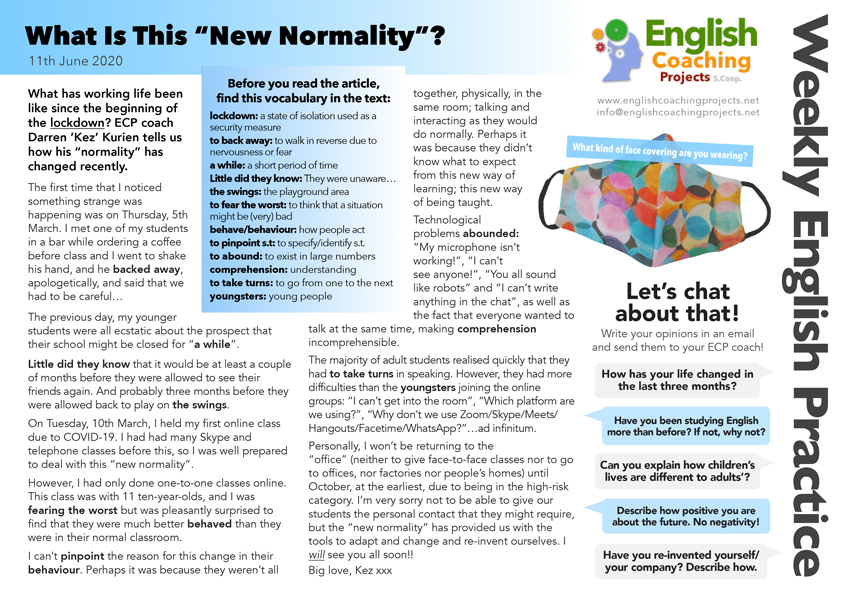 ECP coach Darren ‘Kez’ Kurien tells us what his ‘new normality’ is like.

What has working life been like since the beginning of the lockdown? What does ‘new normality’ really mean?

lockdown: a state of isolation used as a security measure

to back away: to walk in reverse due to nervousness or fear

a while: a short period of time

Little did they know: They were unaware…

the swings: the playground area

to fear the worst: to think that a situation might be (very) bad

to pinpoint s.t: to specify/identify s.t.

to abound: to exist in large numbers

to take turns: to go from one to the next

What has working life been like since the beginning of the lockdown? ECP coach Darren ‘Kez’ Kurien tells us how his ‘normality’ has changed recently.

The first time that I noticed something strange was happening was on Thursday, 5th March. I met one of my students in a bar while ordering a coffee before class and I went to shake his hand, and he backed away, apologetically, and said that we had to be careful…

The previous day, my younger students were all ecstatic about the prospect that their school might be closed for “a while”.

On Tuesday, 10th March, I held my first online class due to COVID-19. I had had many Skype and telephone classes before this, so I was well prepared to deal with this “new normality”.

However, I had only done one-to-one classes online. This class was with 11 ten-year-olds, and I was fearing the worst but was pleasantly surprised to find that they were much better behaved than they were in their normal classroom.

Technological problems abounded: “My microphone isn’t working!”, “I can’t see anyone!”, “You all sound like robots” and “I can’t write anything in the chat”, as well as the fact that everyone wanted to talk at the same time, making comprehension incomprehensible.

The majority of adult students realised quickly that they had to take turns in speaking. However, they had more difficulties than the youngsters joining the online groups: “I can’t get into the room”, “Which platform are we using?”, “Why don’t we use Zoom/Skype/Meets/Hangouts/Facetime/WhatsApp?”…ad infinitum.

Personally, I won’t be returning to the “office” (neither to give face-to-face classes nor to go to offices, nor factories nor people’s homes) until October, at the earliest, due to being in the high-risk category. I’m very sorry not to be able to give our students the personal contact that they might require, but the “new normality” has provided us with the tools to adapt and change and re-invent ourselves. I will see you all soon!!

Maybe you’d like to read these previous WEP articles: