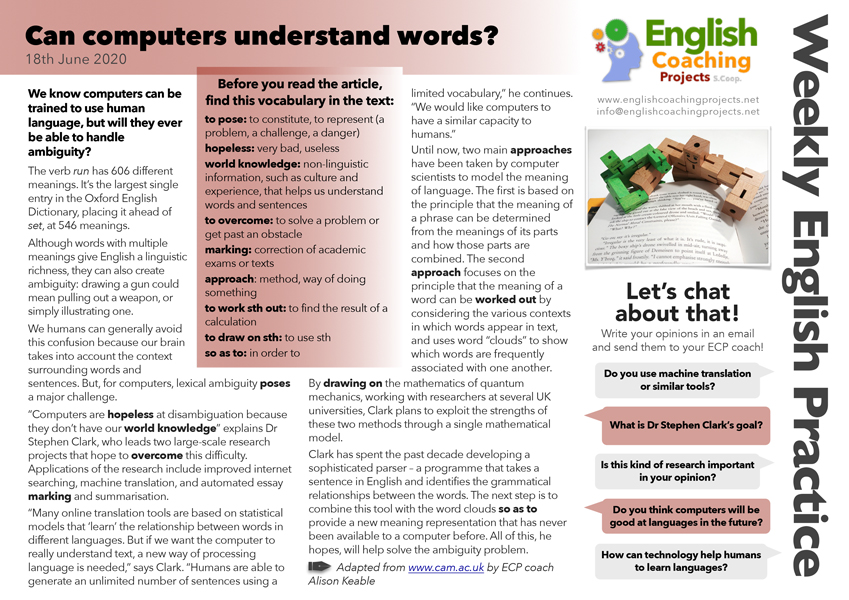 Will computers ever be able to handle ambiguity in language?

ECP coach Ali investigates how ambiguity in the English language can confuse computers.

to pose: to constitute, to represent (a problem, a challenge, a danger)

world knowledge: non-linguistic information, such as culture and experience, that helps us understand words and sentences

to overcome: to solve a problem or get past an obstacle

approach: method, way of doing something

to work sth out: to find the result of a calculation

to draw on sth: to use sth

so as to: in order to

We know computers can be trained to use human language, but will they ever be able to handle ambiguity?

The verb run has 606 different meanings. It’s the largest single entry in the Oxford English Dictionary, placing it ahead of set, at 546 meanings.

Although words with multiple meanings give English a linguistic richness, they can also create ambiguity: drawing a gun could mean pulling out a weapon, or simply illustrating one.

We humans can generally avoid this confusion because our brain takes into account the context surrounding words and sentences. But, for computers, lexical ambiguity poses a major challenge.

“Computers are hopeless at disambiguation because they don’t have our world knowledge” explains Dr Stephen Clark, who leads two large-scale research projects that hope to overcome this difficulty. Applications of the research include improved internet searching, machine translation, and automated essay marking and summarisation.

“Many online translation tools are based on statistical models that ‘learn’ the relationship between words in different languages. But if we want the computer to really understand text, a new way of processing language is needed,” says Clark. “Humans are able to generate an unlimited number of sentences using a limited vocabulary,” he continues. “We would like computers to have a similar capacity to humans.”

By drawing on the mathematics of quantum mechanics, working with researchers at several UK universities, Clark plans to exploit the strengths of these two methods through a single mathematical model.

Clark has spent the past decade developing a sophisticated parser – a programme that takes a sentence in English and identifies the grammatical relationships between the words. The next step is to combine this tool with the word clouds so as to provide a new meaning representation that has never been available to a computer before. All of this, he hopes, will help solve the ambiguity problem.