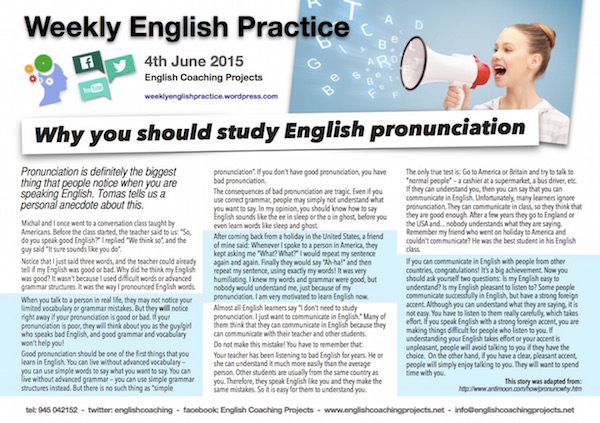 Pronunciation is definitely the biggest thing that people notice when you are speaking English. Tomas tells us a personal anecdote about this.

Michal and I once went to a conversation class taught by Americans. Before the class started, the teacher said to us: “So, do you speak good English?” I replied “We think so”, and the guy said “It sure sounds like you do”.

Notice that I just said three words, and the teacher could already tell if my English was good or bad. Why did he think my English was good? It wasn’t because I used difficult words or advanced grammar structures. It was the way I pronounced English words.

The consequences of bad pronunciation are tragic. Even if you use correct grammar, people may simply not understand what you want to say. In my opinion, you should know how to say English sounds like the ee in sleep or the o in ghost, before you even learn words like sleep and ghost.

After coming back from a holiday in the United States, a friend of mine said: Whenever I spoke to a person in America, they kept asking me “What? What?” I would repeat my sentence again and again. Finally they would say “Ah-ha!” and then repeat my sentence, using exactly my words! It was very humiliating. I knew my words and grammar were good, but nobody would understand me, just because of my pronunciation. I am very motivated to learn English now.

Do not make this mistake! You have to remember that:

Your teacher has been listening to bad English for years. He or she can understand it much more easily than the average person. Other students are usually from the same country as you. Therefore, they speak English like you and they make the same mistakes. So it is easy for them to understand you.

The only true test is: Go to America or Britain and try to talk to “normal people” — a cashier at a supermarket, a bus driver, etc. If they can understand you, then you can say that you can communicate in English. Unfortunately, many learners ignore pronunciation. They can communicate in class, so they think that they are good enough. After a few years they go to England or the USA and… nobody understands what they are saying. Remember my friend who went on holiday to America and couldn’t communicate? He was the best student in his English class.

If you can communicate in English with people from other countries, congratulations! It’s a big achievement. Now you should ask yourself two questions: Is my English easy to understand? Is my English pleasant to listen to? Some people communicate successfully in English, but have a strong foreign accent. Although you can understand what they are saying, it is not easy. You have to listen to them really carefully, which takes effort. If you speak English with a strong foreign accent, you are making things difficult for people who listen to you. If understanding your English takes effort or your accent is unpleasant, people will avoid talking to you if they have the choice.  On the other hand, if you have a clear, pleasant accent, people will simply enjoy talking to you. They will want to spend time with you.

Here are some tips to help you improve your English pronunciation

First of all, don’t worry about not having a native English accent. It’s important to be able to speak clearly, so that people can understand you.

There are many things that you can do to improve your pronunciation and your speaking skills.

1. Listen to spoken English as often as possible.

Listen to how speakers pronounce various words and phrases and “model” your pronunciation on what you hear.

Use the phonetic alphabet page (in most good dictionaries) as a guide to pronouncing new words.

3. Don’t forget to learn the word stress of a new word.

Every English word has its own stress, or intonation. Word stress is important. In fact, it is more likely that someone misunderstands you because of wrong word stress than because of the wrong pronunciation of a sound.

4. Work out which sounds cause you most problems in English.

5. Be aware of intonation and sentence stress.

Not all words in a sentence have equal stress, and generally only the “information” words (nouns and verbs) are stressed.

‘Where’s the ‘red and ‘blue ‘jumper I ‘gave you ‘yesterday?

The unstressed words (such as “the”, “I”, “you” and “and”) don’t carry as much “weight” as the stressed words. They become much smaller in length, and are almost abbreviated. For example, “and” becomes “n”.

Sentence stress isn’t “fixed” like word stress. In fact, you can stress words that are normally unstressed in order to highlight different meanings.

There are a couple of easy to remember rules about intonation. Usually our voices go up at the end of the sentence to show a question, and down at the end to show a statement.

If you speak too fast, the danger is that you could skip over some words, fail to pronounce them completely, or mix them up. If you speak too slowly, you might end up sounding unnatural. But it’s better to speak slowly and clearly than too quickly.

This was adapted from: http://www.antimoon.com/how/pronuncwhy.htm