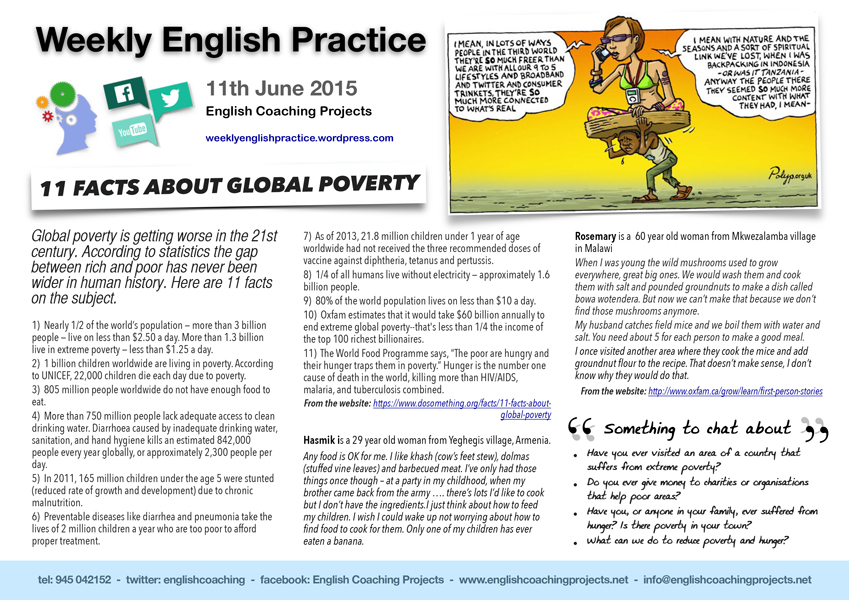 Global poverty is getting worse in the 21st century. According to statistics the gap between rich and poor has never been wider in human history. Here are 11 facts on the subject.

2)  1 billion children worldwide are living in poverty. According to UNICEF, 22,000 children die each day due to poverty.

3)  805 million people worldwide do not have enough food to eat.

5)  In 2011, 165 million children under the age 5 were stunted (reduced rate of growth and development) due to chronic malnutrition.

6)  Preventable diseases like diarrhea and pneumonia take the lives of 2 million children a year who are too poor to afford proper treatment.

7)  As of 2013, 21.8 million children under 1 year of age worldwide had not received the three recommended doses of vaccine against diphtheria, tetanus and pertussis.

8)  1/4 of all humans live without electricity — approximately 1.6 billion people.

10)  Oxfam estimates that it would take $60 billion annually to end extreme global poverty–that’s less than 1/4 the income of the top 100 richest billionaires.

11)  The World Food Programme says, “The poor are hungry and their hunger traps them in poverty.” Hunger is the number one cause of death in the world, killing more than HIV/AIDS, malaria, and tuberculosis combined.

Hasmik is a 29 year old woman from Yeghegis village, Armenia.

Any food is OK for me. I like khash (cow’s feet stew), dolmas (stuffed vine leaves) and barbecued meat. I’ve only had those things once though – at a party in my childhood, when my brother came back from the army …. there’s lots I’d like to cook but I don’t have the ingredients.I just think about how to feed my children. I wish I could wake up not worrying about how to find food to cook for them. Only one of my children has ever eaten a banana.

When I was young the wild mushrooms used to grow everywhere, great big ones. We would wash them and cook them with salt and pounded groundnuts to make a dish called bowa wotendera. But now we can’t make that because we don’t find those mushrooms anymore.

My husband catches field mice and we boil them with water and salt. You need about 5 for each person to make a good meal.

I once visited another area where they cook the mice and add groundnut flour to the recipe. That doesn’t make sense, I don’t know why they would do that.