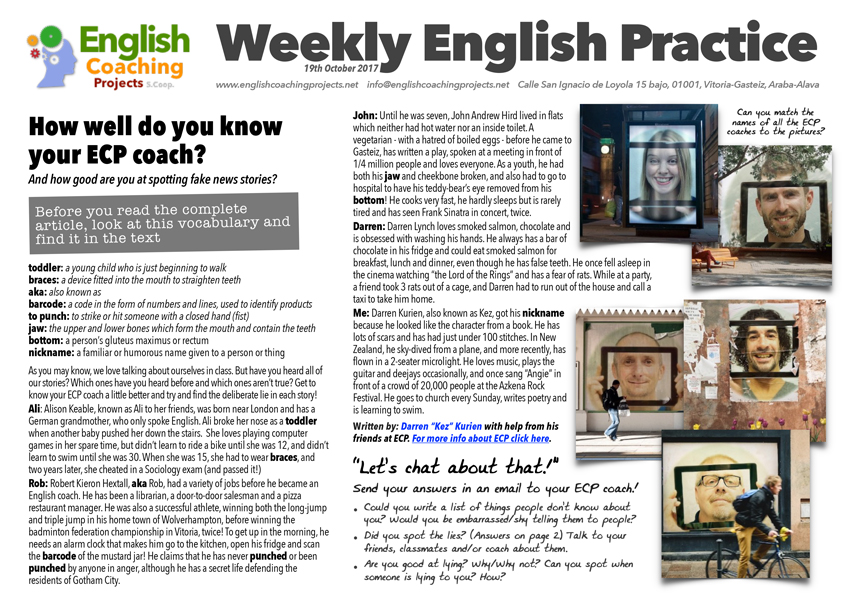 And how good are you at spotting fake news stories?

toddler: a young child who is just beginning to walk

braces: a device fitted into the mouth to straighten teeth

aka: also known as

barcode: a code in the form of numbers and lines, used to identify products

to punch: to strike or hit someone with a closed hand (fist)

jaw: the upper and lower bones which form the mouth and contain the teeth

nickname: a familiar or humorous name given to a person or thing

As you may know, we love talking about ourselves in class. But have you heard all of our stories? Which ones have you heard before and which ones aren’t true? Get to know your ECP coach a little better and try and find the deliberate lie in each story!

Ali: Alison Keable, known as Ali to her friends, was born near London and has a German grandmother, who only spoke English. Ali broke her nose as a toddler when another baby pushed her down the stairs.  She loves playing computer games in her spare time, but didn’t learn to ride a bike until she was 12, and didn’t learn to swim until she was 30. When she was 15, she had to wear braces, and two years later, she cheated in a Sociology exam (and passed it!)

Rob: Robert Kieron Hextall, aka Rob, had a variety of jobs before he became an English coach. He has been a librarian, a door-to-door salesman and a pizza restaurant manager. He was also a successful athlete, winning both the long-jump and triple jump in his home town of Wolverhampton, before winning the badminton federation championship in Vitoria, twice! To get up in the morning, he needs an alarm clock that makes him go to the kitchen, open his fridge and scan the barcode of the mustard jar! He claims that he has never punched or been punched by anyone in anger, although he has a secret life defending the residents of Gotham City.

John: Until he was seven, John Andrew Hird lived in flats which neither had hot water nor an inside toilet. A vegetarian – with a hatred of boiled eggs – before he came to Gasteiz, has written a play, spoken at a meeting in front of 1/4 million people and loves everyone. As a youth, he had both his jaw and cheekbone broken, and also had to go to hospital to have his teddy-bear’s eye removed from his bottom! He cooks very fast, he hardly sleeps but is rarely tired and has seen Frank Sinatra in concert, twice.

Darren: Darren Lynch loves smoked salmon, chocolate and is obsessed with washing his hands. He always has a bar of chocolate in his fridge and could eat smoked salmon for breakfast, lunch and dinner, even though he has false teeth. He once fell asleep in the cinema watching “the Lord of the Rings” and has a fear of rats. While at a party, a friend took 3 rats out of a cage, and Darren had to run out of the house and call a taxi to take him home.

Me: Darren Kurien, also known as Kez, got his nickname because he looked like the character from a book. He has lots of scars and has had just under 100 stitches. In New Zealand, he sky-dived from a plane, and more recently, has flown in a 2-seater microlight. He loves music, plays the guitar and deejays occasionally, and once sang “Angie” in front of a crowd of 20,000 people at the Azkena Rock Festival. He goes to church every Sunday, writes poetry and is learning to swim.

Written by: Darren “Kez” Kurien with help from his friends at ECP. For more info about ECP click here.

Answers: Ali: was born IN London (not near) / John: had his teddy-bear’s eye stuck up his NOSE / Rob: ISN’T Batman / Darren: DOESN’T have false teeth / Kez: DOESN’T go to church