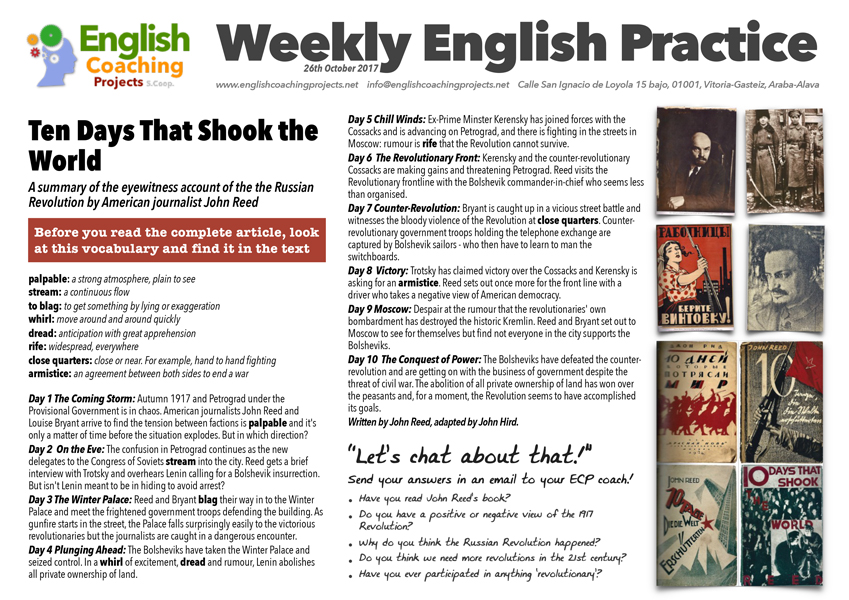 to blag: to get something by lying or exaggeration

whirl: move around and around quickly

close quarters: close or near. For example, hand to hand fighting

armistice: an agreement between both sides to end a war

Day 1 The Coming Storm: Autumn 1917 and Petrograd under the Provisional Government is in chaos. American journalists John Reed and Louise Bryant arrive to find the tension between factions is palpable and it’s only a matter of time before the situation explodes. But in which direction?

Day 2  On the Eve: The confusion in Petrograd continues as the new delegates to the Congress of Soviets stream into the city. Reed gets a brief interview with Trotsky and overhears Lenin calling for a Bolshevik insurrection. But isn’t Lenin meant to be in hiding to avoid arrest?

Day 3 The Winter Palace: Reed and Bryant blag their way in to the Winter Palace and meet the frightened government troops defending the building. As gunfire starts in the street, the Palace falls surprisingly easily to the victorious revolutionaries but the journalists are caught in a dangerous encounter.

Day 4 Plunging Ahead: The Bolsheviks have taken the Winter Palace and seized control. In a whirl of excitement, dread and rumour, Lenin abolishes all private ownership of land.

Day 5 Chill Winds: Ex-Prime Minster Kerensky has joined forces with the Cossacks and is advancing on Petrograd, and there is fighting in the streets in Moscow: rumour is rife that the Revolution cannot survive.

Day 6  The Revolutionary Front: Kerensky and the counter-revolutionary Cossacks are making gains and threatening Petrograd. Reed visits the Revolutionary frontline with the Bolshevik commander-in-chief who seems less than organised.

Day 7 Counter-Revolution: Bryant is caught up in a vicious street battle and witnesses the bloody violence of the Revolution at close quarters. Counter-revolutionary government troops holding the telephone exchange are captured by Bolshevik sailors – who then have to learn to man the switchboards.

Day 8  Victory: Trotsky has claimed victory over the Cossacks and Kerensky is asking for an armistice. Reed sets out once more for the front line with a driver who takes a negative view of American democracy.

Day 9 Moscow: Despair at the rumour that the revolutionaries’ own bombardment has destroyed the historic Kremlin. Reed and Bryant set out to Moscow to see for themselves but find not everyone in the city supports the Bolsheviks.

Day 10  The Conquest of Power: The Bolsheviks have defeated the counter-revolution and are getting on with the business of government despite the threat of civil war. The abolition of all private ownership of land has won over the peasants and, for a moment, the Revolution seems to have accomplished its goals.