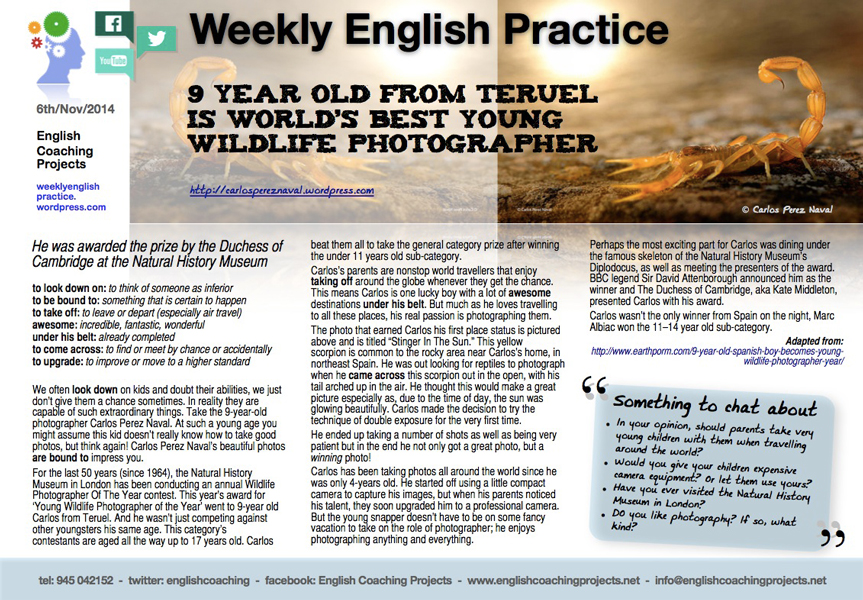 to look down on: to think of someone as inferior

to be bound to: something that is certain to happen

to take off: to leave or depart (especially air travel)

under his belt: already completed

to come across: to find or meet by chance or accidentally

to upgrade: to improve or move to a higher standard

We often look down on kids and doubt their abilities, we just don’t give them a chance sometimes. In reality they are capable of such extraordinary things. Take the 9-year-old photographer Carlos Perez Naval. At such a young age you might assume this kid doesn’t really know how to take good photos, but think again! Carlos Perez Naval’s beautiful photos are bound to impress you.

For the last 50 years (since 1964), the Natural History Museum in London has been conducting an annual Wildlife Photographer Of The Year contest. This year’s award for ‘Young Wildlife Photographer of the Year’ went to 9-year old Carlos from Teruel. And he wasn’t just competing against other youngsters his same age. This category’s contestants are aged all the way up to 17 years old. Carlos beat them all to take the general category prize after winning the under 11 years old sub-category.

Carlos’s parents are nonstop world travellers that enjoy taking off around the globe whenever they get the chance. This means Carlos is one lucky boy with a lot of awesome destinations under his belt. But much as he loves travelling to all these places, his real passion is photographing them.

The photo that earned Carlos his first place status is pictured above and is titled “Stinger In The Sun.” This yellow scorpion is common to the rocky area near Carlos’s home, in northeast Spain. He was out looking for reptiles to photograph when he came across this scorpion out in the open, with his tail arched up in the air. He thought this would make a great picture especially as, due to the time of day, the sun was glowing beautifully. Carlos made the decision to try the technique of double exposure for the very first time.

He ended up taking a number of shots as well as being very patient but in the end he not only got a great photo, but a winning photo!

Carlos has been taking photos all around the world since he was only 4-years old. He started off using a little compact camera to capture his images, but when his parents noticed his talent, they soon upgraded him to a professional camera. But the young snapper doesn’t have to be on some fancy vacation to take on the role of photographer; he enjoys photographing anything and everything.

Perhaps the most exciting part for Carlos was dining under the famous skeleton of the Natural History Museum’s Diplodocus, as well as meeting the presenters of the award. BBC legend Sir David Attenborough announced him as the winner and The Duchess of Cambridge, aka Kate Middleton, presented Carlos with his award.

Carlos wasn’t the only winner from Spain on the night, Marc Albiac won the 11-14 year old sub-category.