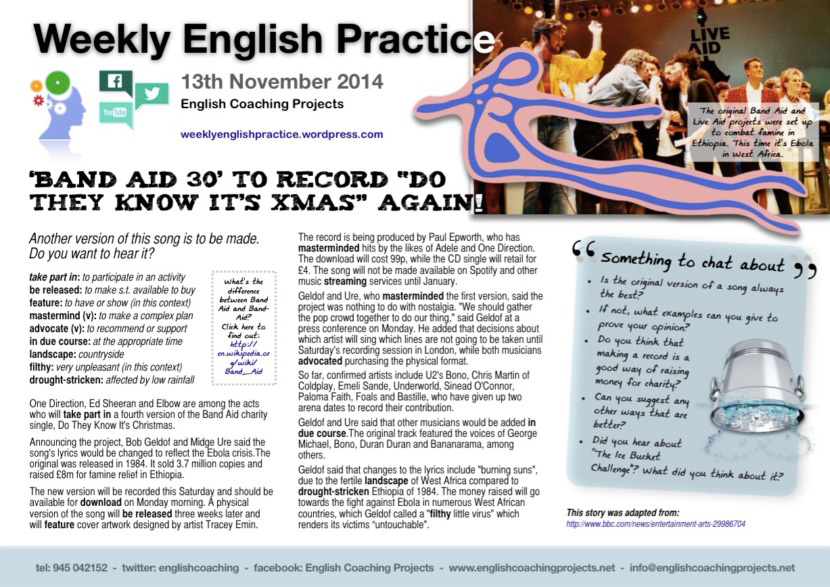 Another version of this song is to be made. Do you want to hear it?

take part in: to participate in an activity

be released: to make s.t. available to buy

feature: to have or show (in this context)

advocate (v): to recommend or support

in due course: at the appropriate time

filthy: very unpleasant (in this context)

One Direction, Ed Sheeran and Elbow are among the acts who will take part in a fourth version of the Band Aid charity single, Do They Know It’s Christmas.

Announcing the project, Bob Geldof and Midge Ure said the song’s lyrics would be changed to reflect the Ebola crisis.The original was released in 1984. It sold 3.7 million copies and raised £8m for famine relief in Ethiopia.

The new version will be recorded this Saturday and should be available for download on Monday morning. A physical version of the song will be released three weeks later and will feature cover artwork designed by artist Tracey Emin.

The record is being produced by Paul Epworth, who has masterminded hits by the likes of Adele and One Direction. The download will cost 99p, while the CD single will retail for £4. The song will not be made available on Spotify and other music streaming services until January.

Geldof and Ure, who masterminded the first version, said the project was nothing to do with nostalgia. “We should gather the pop crowd together to do our thing,” said Geldof at a press conference on Monday. He added that decisions about which artist will sing which lines are not going to be taken until Saturday’s recording session in London, while both musicians advocated purchasing the physical format.

So far, confirmed artists include U2’s Bono, Chris Martin of Coldplay, Emeli Sande, Underworld, Sinead O’Connor, Paloma Faith, Foals and Bastille, who have given up two arena dates to record their contribution.

Geldof and Ure said that other musicians would be added in due course.The original track featured the voices of George Michael, Bono, Duran Duran and Bananarama, among others.

Geldof said that changes to the lyrics include “burning suns”, due to the fertile landscape of West Africa compared to drought-stricken Ethiopia of 1984. The money raised will go towards the fight against Ebola in numerous West African countries, which Geldof called a “filthy little virus” which renders its victims “untouchable”.

This story was adapted from: http://www.bbc.com/news/entertainment-arts-29986704