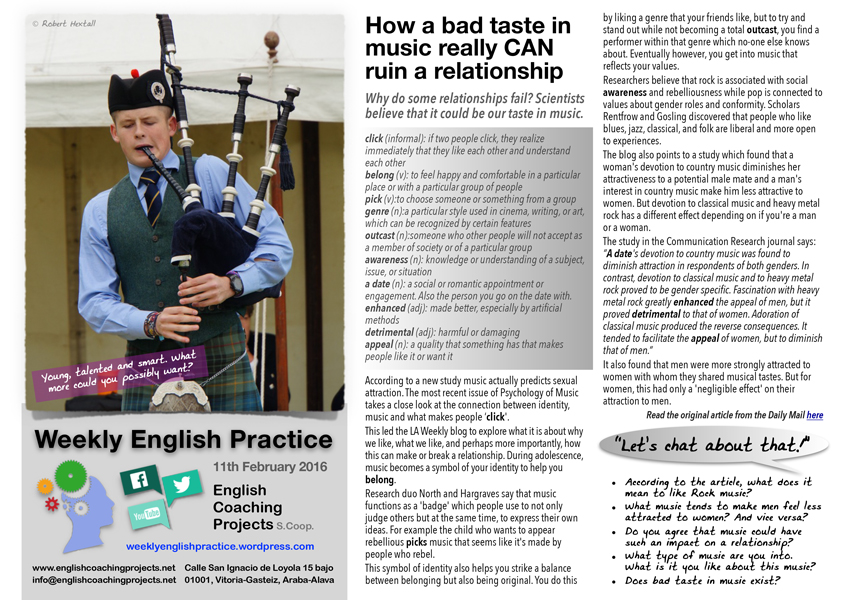 Why do some relationships fail? Scientists believe that it could be our taste in music.

pick (v):to choose someone or something from a group

genre (n):a particular style used in cinema, writing, or art, which can be recognized by certain features

outcast (n):someone who other people will not accept as a member of society or of a particular group

awareness (n): knowledge or understanding of a subject, issue, or situation

a date (n): a social or romantic appointment or engagement. Also the person you go on the date with.

appeal (n): a quality that something has that makes people like it or want it

According to a new study music actually predicts sexual attraction. The most recent issue of Psychology of Music takes a close look at the connection between identity, music and what makes people ‘click‘.

This led the LA Weekly blog to explore what it is about why we like, what we like, and perhaps more importantly, how this can make or break a relationship. During adolescence, music becomes a symbol of your identity to help you belong.

Research duo North and Hargraves say that music functions as a ‘badge’ which people use to not only judge others but at the same time, to express their own ideas. For example the child who wants to appear rebellious picks music that seems like it’s made by people who rebel.

This symbol of identity also helps you strike a balance between belonging but also being original. You do this by liking a genre that your friends like, but to try and stand out while not becoming a total outcast, you find a performer within that genre which no-one else knows about. Eventually however, you get into music that reflects your values.

Researchers believe that rock is associated with social awareness and rebelliousness while pop is connected to values about gender roles and conformity. Scholars Rentfrow and Gosling discovered that people who like blues, jazz, classical, and folk are liberal and more open to experiences.

The blog also points to a study which found that a woman’s devotion to country music diminishes her attractiveness to a potential male mate and a man’s interest in country music make him less attractive to women. But devotion to classical music and heavy metal rock has a different effect depending on if you’re a man or a woman.

The study in the Communication Research journal says: “A date‘s devotion to country music was found to diminish attraction in respondents of both genders. In contrast, devotion to classical music and to heavy metal rock proved to be gender specific. Fascination with heavy metal rock greatly enhanced the appeal of men, but it proved detrimental to that of women. Adoration of classical music produced the reverse consequences. It tended to facilitate the appeal of women, but to diminish that of men.“

It also found that men were more strongly attracted to women with whom they shared musical tastes. But for women, this had only a ‘negligible effect’ on their attraction to men.

Read the original article from the Daily Mail here