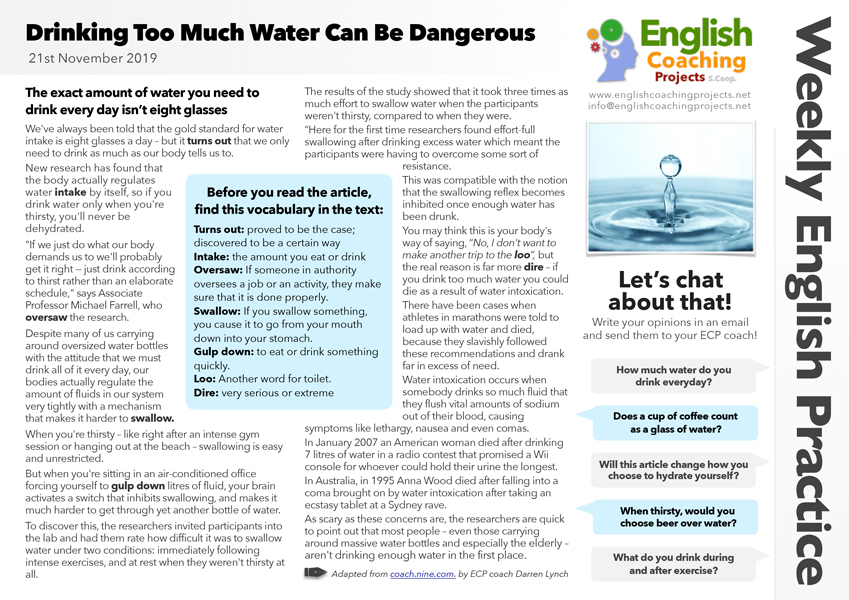 Do you drink too much water? The exact amount of water you need to drink every day isn’t eight glasses.

turns out: proved to be the case; discovered to be a certain way

intake: the amount you eat or drink

oversaw: If someone in authority oversees a job or an activity, they make sure that it is done properly.

swallow: If you swallow something, you cause it to go from your mouth down into your stomach.

gulp down: to eat or drink something quickly.

loo: Another word for toilet.

We’ve always been told that the gold standard for water intake is eight glasses a day – but it turns out that we only need to drink as much as our body tells us to.

New research has found that the body actually regulates water intake by itself, so if you drink water only when you’re thirsty, you’ll never be dehydrated.

“If we just do what our body demands us to we’ll probably get it right — just drink according to thirst rather than an elaborate schedule,” says Associate Professor Michael Farrell, who oversaw the research.

Despite many of us carrying around oversized water bottles with the attitude that we must drink all of it every day, our bodies actually regulate the amount of fluids in our system very tightly with a mechanism that makes it harder to swallow.

When you’re thirsty – like right after an intense gym session or hanging out at the beach – swallowing is easy and unrestricted.

But when you’re sitting in an air-conditioned office forcing yourself to gulp down litres of fluid, your brain activates a switch that inhibits swallowing, and makes it much harder to get through yet another bottle of water.

To discover this, the researchers invited participants into the lab and had them rate how difficult it was to swallow water under two conditions: immediately following intense exercises, and at rest when they weren’t thirsty at all.

The results of the study showed that it took three times as much effort to swallow water when the participants weren’t thirsty, compared to when they were.

“Here for the first time researchers found effort-full swallowing after drinking excess water which meant the participants were having to overcome some sort of resistance.

This was compatible with the notion that the swallowing reflex becomes inhibited once enough water has been drunk.

You may think this is your body’s way of saying, “No, I don’t want to make another trip to the loo”, but the real reason is far more dire – if you drink too much water you could die as a result of water intoxication.

There have been cases when athletes in marathons were told to load up with water and died, because they slavishly followed these recommendations and drank far in excess of need.

Water intoxication occurs when somebody drinks so much fluid that they flush vital amounts of sodium out of their blood, causing symptoms like lethargy, nausea and even comas.

In January 2007 an American woman died after drinking 7 litres of water in a radio contest that promised a Wii console for whoever could hold their urine the longest.

In Australia, in 1995 Anna Wood died after falling into a coma brought on by water intoxication after taking an ecstasy tablet at a Sydney rave.

As scary as these concerns are, the researchers are quick to point out that most people – even those carrying around massive water bottles and especially the elderly – aren’t drinking enough water in the first place.