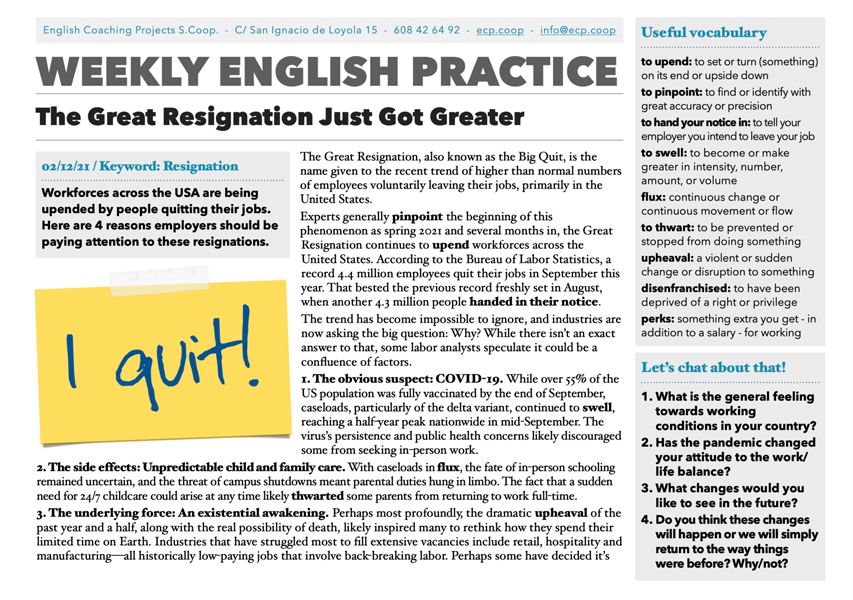 The Great Resignation Just Got Greater

Workforces across the USA are being upended by people quitting their jobs. Here are 4 reasons employers should be paying attention to these resignations.

to upend: to set or turn (something) on its end or upside down

to pinpoint: to find or identify with great accuracy or precision

to hand your notice in: to tell your employer you intend to leave your job

to swell: to become or make greater in intensity, number, amount, or volume

to thwart: to be prevented or stopped from doing something

upheaval: a violent or sudden change or disruption to something

disenfranchised: to have been deprived of a right or privilege

perks: something extra you get – in addition to a salary – for working

Workforces across the USA are being upended by people quitting their jobs. Here are 4 reasons employers should be paying attention to these resignations.

The Great Resignation, also known as the Big Quit, is the name given to the recent trend of higher than normal numbers of employees voluntarily leaving their jobs, primarily in the United States.

Experts generally pinpoint the beginning of this phenomenon as spring 2021 and several months in, the Great Resignation continues to upend workforces across the United States. According to the Bureau of Labor Statistics, a record 4.4 million employees quit their jobs in September this year. That bested the previous record freshly set in August, when another 4.3 million people handed in their notice.

The trend has become impossible to ignore, and industries are now asking the big question: Why? While there isn’t an exact answer to that, some labor analysts speculate it could be a confluence of factors.

1. The obvious suspect: COVID-19. While over 55% of the US population was fully vaccinated by the end of September, caseloads, particularly of the delta variant, continued to swell, reaching a half-year peak nationwide in mid-September. The virus’s persistence and public health concerns likely discouraged some from seeking in-person work.

2. The side effects: Unpredictable child and family care. With caseloads in flux, the fate of in-person schooling remained uncertain, and the threat of campus shutdowns meant parental duties hung in limbo. The fact that a sudden need for 24/7 childcare could arise at any time likely thwarted some parents from returning to work full-time.

3. The underlying force: An existential awakening. Perhaps most profoundly, the dramatic upheaval of the past year and a half, along with the real possibility of death, likely inspired many to rethink how they spend their limited time on Earth. Industries that have struggled most to fill extensive vacancies include retail, hospitality and manufacturing—all historically low-paying jobs that involve back-breaking labor. Perhaps some have decided it’s simply not worth it. News reports suggest some are hoping to switch careers, while others, such as older workers, are opting for early retirement.

4. The ultimate result: Newly empowered workers. With the masses behind it, the Great Resignation promises a sort of labor revolution for a formerly disenfranchised workforce. With many big-name companies starved for staff, some have begun to offer employee perks ranging from wage bonuses, to free tuition, to student loan relief, to complimentary daycare. And some job seekers are realising they now have the power to choose—or to use the worker shortage as an opportunity to demand better conditions, as shown by an increase in worker strikes at companies.

Let’s chat about the Great Resignation!

How to Quit Your Job and Leave a Good Impression

Is It Time for Universal Basic Income?