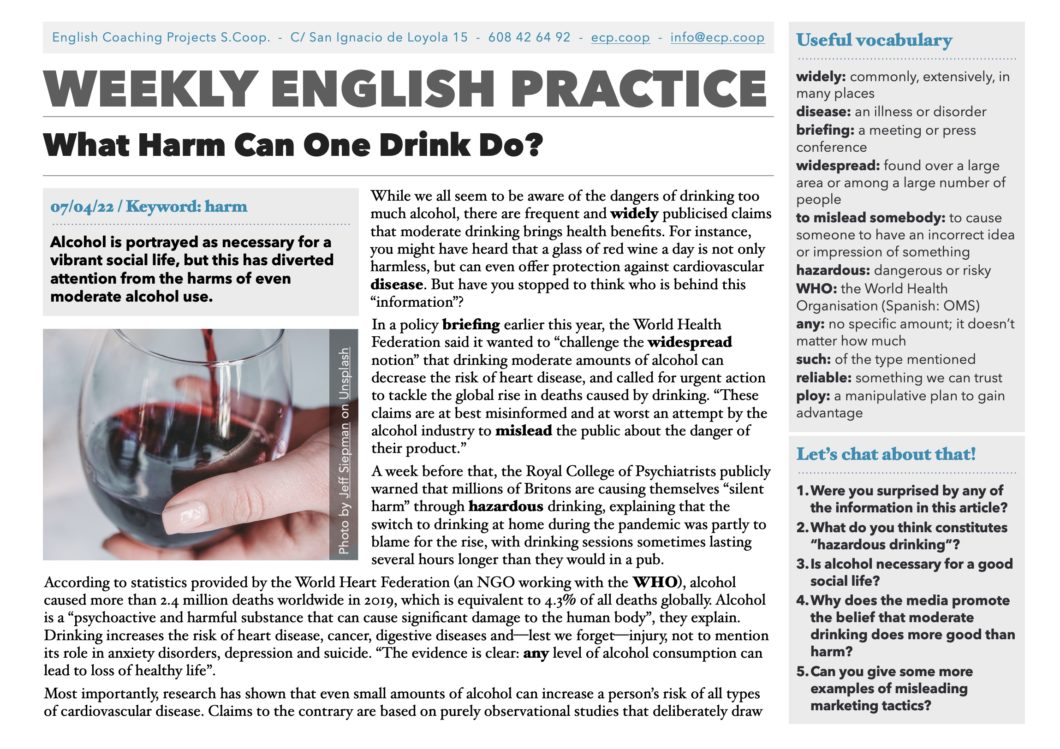 What Harm Can One Drink Do?

widely: commonly, extensively, in many places

disease: an illness or disorder

briefing: a meeting or press conference

widespread: found over a large area or among a large number of people

to mislead somebody: to cause someone to have an incorrect idea or impression of something

any: no specific amount; it doesn’t matter how much

such: of the type mentioned

reliable: something we can trust

englishcoachingprojects · What Harm Can One Drink Do?

While we all seem to be aware of the dangers of drinking too much alcohol, there are frequent and widely publicised claims that moderate drinking brings health benefits. For instance, you might have heard that a glass of red wine a day is not only harmless, but can even offer protection against cardiovascular disease. But have you stopped to think who is behind this “information”?

In a policy briefing earlier this year, the World Health Federation said it wanted to “challenge the widespread notion” that drinking moderate amounts of alcohol can decrease the risk of heart disease, and called for urgent action to tackle the global rise in deaths caused by drinking. “These claims are at best misinformed and at worst an attempt by the alcohol industry to mislead the public about the danger of their product.”

A week before that, the Royal College of Psychiatrists publicly warned that millions of Britons are causing themselves “silent harm” through hazardous drinking, explaining that the switch to drinking at home during the pandemic was partly to blame for the rise, with drinking sessions sometimes lasting several hours longer than they would in a pub.

According to statistics provided by the World Heart Federation (an NGO working with the WHO), alcohol caused more than 2.4 million deaths worldwide in 2019, which is equivalent to 4.3% of all deaths globally. Alcohol is a “psychoactive and harmful substance that can cause significant damage to the human body”, they explain. Drinking increases the risk of heart disease, cancer, digestive diseases and—lest we forget—injury, not to mention its role in anxiety disorders, depression and suicide. “The evidence is clear: any level of alcohol consumption can lead to loss of healthy life”.

Most importantly, research has shown that even small amounts of alcohol can increase a person’s risk of all types of cardiovascular disease. Claims to the contrary are based on purely observational studies that deliberately draw an association between abstinence from alcohol and illness – but such studies fail to account for other factors, such as the fact that many people who get sober later in life have already done considerable harm to their organs precisely by drinking.

To date, no reliable correlation has been found between moderate alcohol consumption and a lower risk of heart disease. While the risk for low-to-moderate drinkers is considerably less than that for heavy drinkers, for some people there simply is no safe level of drinking. Ultimately, it’s our personal responsibility to weigh up the risks of consuming ethanol in all its prettily packaged forms, and to be aware of its addictive nature and the marketing ploys designed to keep us dependent on this very lucrative substance.

Adapted from this article by ECP coach Alison Keable

1.Were you surprised by any of the information in this article?

2.What do you think constitutes “hazardous drinking”?

3.Is alcohol necessary for a good social life?

4.Why does the media promote the belief that moderate drinking does more good than harm?

5.Can you give some more examples of misleading marketing tactics?

Alcohol helps you speak English better but other factors are more important!