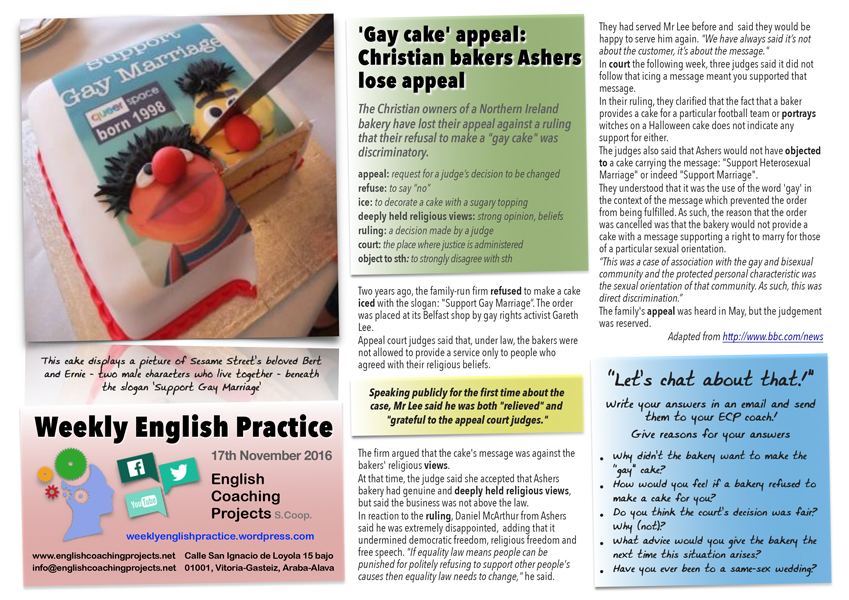 The Christian owners of a Northern Ireland bakery have lost their appeal against a ruling that their refusal to make a “gay cake” was discriminatory.

appeal: request for a judge’s decision to be changed

ice: to decorate a cake with a sugary topping

ruling: a decision made by a judge

court: the place where justice is administered

object to sth: to strongly disagree with sth

Two years ago, the family-run firm refused to make a cake iced with the slogan: “Support Gay Marriage”. The order was placed at its Belfast shop by gay rights activist Gareth Lee.

Appeal court judges said that, under law, the bakers were not allowed to provide a service only to people who agreed with their religious beliefs.

The firm argued that the cake’s message was against the bakers’ religious views.

At that time, the judge said she accepted that Ashers bakery had genuine and deeply held religious views, but said the business was not above the law.

In reaction to the ruling, Daniel McArthur from Ashers said he was extremely disappointed,  adding that it undermined democratic freedom, religious freedom and free speech. “If equality law means people can be punished for politely refusing to support other people’s causes then equality law needs to change,” he said.

They had served Mr Lee before and  said they would be happy to serve him again. “We have always said it’s not about the customer, it’s about the message.”

In court the following week, three judges said it did not follow that icing a message meant you supported that message.

In their ruling, they clarified that the fact that a baker provides a cake for a particular football team or portrays witches on a Halloween cake does not indicate any support for either.

The judges also said that Ashers would not have objected to a cake carrying the message: “Support Heterosexual Marriage” or indeed “Support Marriage”.

They understood that it was the use of the word ‘gay’ in the context of the message which prevented the order from being fulfilled. As such, the reason that the order was cancelled was that the bakery would not provide a cake with a message supporting a right to marry for those of a particular sexual orientation.

“This was a case of association with the gay and bisexual community and the protected personal characteristic was the sexual orientation of that community. As such, this was direct discrimination.”

The family’s appeal was heard in May, but the judgement was reserved.