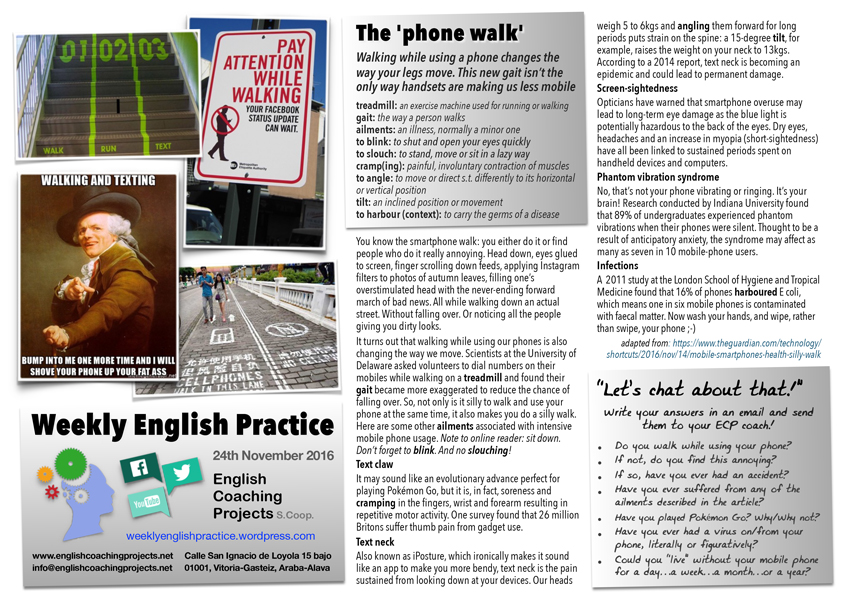 Walking while using a phone changes the way your legs move. This new gait isn’t the only way handsets are making us less mobile

treadmill: an exercise machine used for running or walking

gait: the way a person walks

ailments: an illness, normally a minor one

to blink: to shut and open your eyes quickly

to slouch: to stand, move or sit in a lazy way

to angle: to move or direct s.t. differently to its horizontal or vertical position

tilt: an inclined position or movement

to harbour (context): to carry the germs of a disease

You know the smartphone walk: you either do it or find people who do it really annoying. Head down, eyes glued to screen, finger scrolling down feeds, applying Instagram filters to photos of autumn leaves, filling one’s overstimulated head with the never-ending forward march of bad news. All while walking down an actual street. Without falling over. Or noticing all the people giving you dirty looks.

It turns out that walking while using our phones is also changing the way we move. Scientists at the University of Delaware asked volunteers to dial numbers on their mobiles while walking on a treadmill and found their gait became more exaggerated to reduce the chance of falling over. So, not only is it silly to walk and use your phone at the same time, it also makes you do a silly walk. Here are some other ailments associated with intensive mobile phone usage. Note to online reader: sit down. Don’t forget to blink. And no slouching!

It may sound like an evolutionary advance perfect for playing Pokémon Go, but it is, in fact, soreness and cramping in the fingers, wrist and forearm resulting in repetitive motor activity. One survey found that 26 million Britons suffer thumb pain from gadget use.

Also known as iPosture, which ironically makes it sound like an app to make you more bendy, text neck is the pain sustained from looking down at your devices. Our heads weigh 5 to 6kgs and angling them forward for long periods puts strain on the spine: a 15-degree tilt, for example, raises the weight on your neck to 13kgs. According to a 2014 report, text neck is becoming an epidemic and could lead to permanent damage.

Opticians have warned that smartphone overuse may lead to long-term eye damage as the blue light is potentially hazardous to the back of the eyes. Dry eyes, headaches and an increase in myopia (short-sightedness) have all been linked to sustained periods spent on handheld devices and computers.

No, that’s not your phone vibrating or ringing. It’s your brain! Research conducted by Indiana University found that 89% of undergraduates experienced phantom vibrations when their phones were silent. Thought to be a result of anticipatory anxiety, the syndrome may affect as many as seven in 10 mobile-phone users.

A  2011 study at the London School of Hygiene and Tropical Medicine found that 16% of phones harboured E coli, which means one in six mobile phones is contaminated with faecal matter. Now wash your hands, and wipe, rather than swipe, your phone 😉