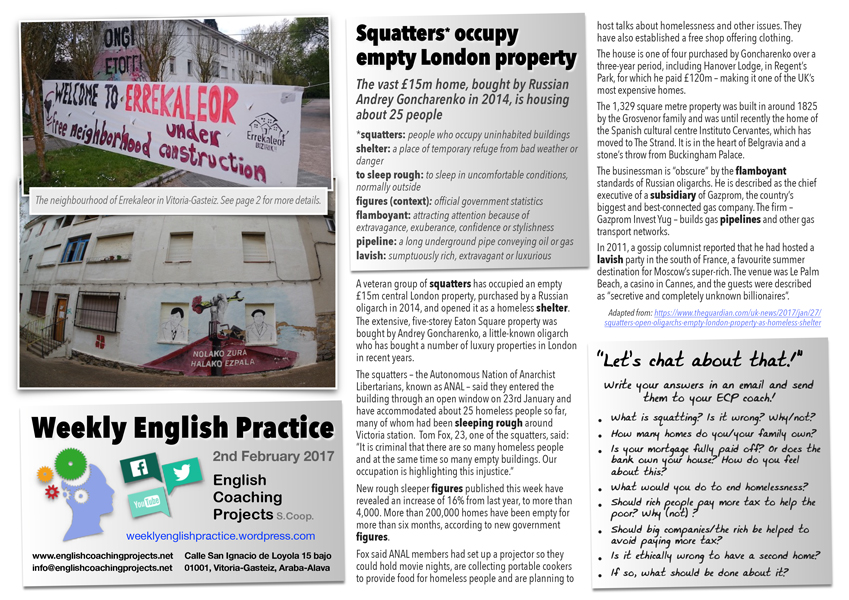 The vast £15m home, bought by Russian Andrey Goncharenko in 2014, is housing about 25 people

shelter: a place of temporary refuge from bad weather or danger

to sleep rough: to sleep in uncomfortable conditions, normally outside

flamboyant: attracting attention because of extravagance, exuberance, confidence or stylishness

A veteran group of squatters has occupied an empty £15m central London property, purchased by a Russian oligarch in 2014, and opened it as a homeless shelter.

The extensive, five-storey Eaton Square property was bought by Andrey Goncharenko, a little-known oligarch who has bought a number of luxury properties in London in recent years.

New rough sleeper figures published this week have revealed an increase of 16% from last year, to more than 4,000. More than 200,000 homes have been empty for more than six months, according to new government figures.

The house is one of four purchased by Goncharenko over a three-year period, including Hanover Lodge, in Regent’s Park, for which he paid £120m – making it one of the UK’s most expensive homes.

The 1,329 square metre property was built in around 1825 by the Grosvenor family and was until recently the home of the Spanish cultural centre Instituto Cervantes, which has moved to The Strand. It is in the heart of Belgravia and a stone’s throw from Buckingham Palace.

The businessman is “obscure” by the flamboyant standards of Russian oligarchs. He is described as the chief executive of a subsidiary of Gazprom, the country’s biggest and best-connected gas company. The firm – Gazprom Invest Yug – builds gas pipelines and other gas transport networks.

In 2011, a gossip columnist reported that he had hosted a lavish party in the south of France, a favourite summer destination for Moscow’s super-rich. The venue was Le Palm Beach, a casino in Cannes, and the guests were described as “secretive and completely unknown billionaires”.

Write your answers and send them by email to your ECP coach. Why not record your voice too? Listen to yourself speak and identify what you have to improve on ????