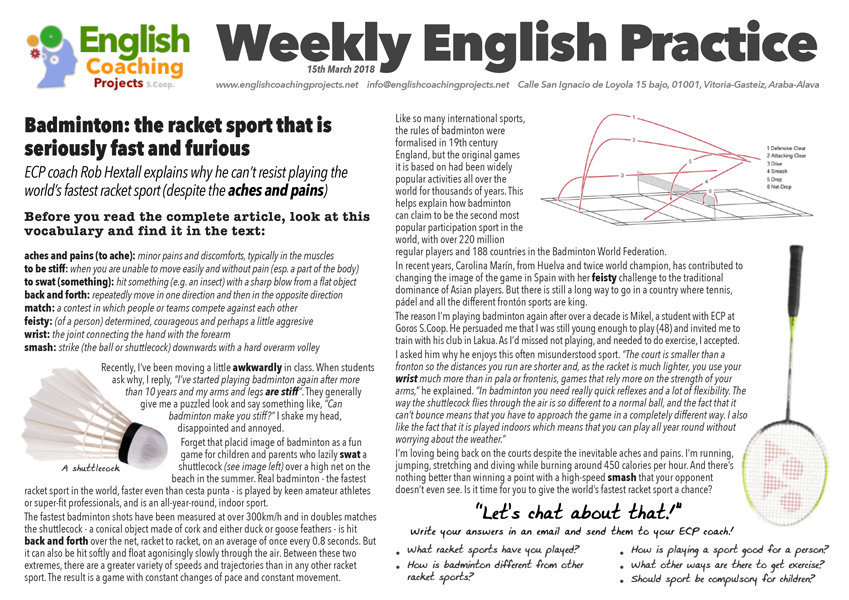 aches and pains (to ache): minor pains and discomforts, typically in the muscles

to be stiff: when you are unable to move easily and without pain (esp. a part of the body)

to swat (something): hit something (e.g. an insect) with a sharp blow from a flat object

back and forth: repeatedly move in one direction and then in the opposite direction

match: a contest in which people or teams compete against each other

feisty: (of a person) determined, courageous and perhaps a little aggresive

wrist: the joint connecting the hand with the forearm

smash: strike (the ball or shuttlecock) downwards with a hard overarm volley

Recently, I’ve been moving a little awkwardly in class. When students ask why, I reply, “I’ve started playing badminton again after more than 10 years and my arms and legs are stiff”. They generally give me a puzzled look and say something like, “Can badminton make you stiff?” I shake my head, disappointed and annoyed.

Forget that placid image of badminton as a fun game for children and parents who lazily swat a shuttlecock (see image left) over a high net on the beach in the summer. Real badminton – the fastest racket sport in the world, faster even than cesta punta – is played by keen amateur athletes or super-fit professionals, and is an all-year-round, indoor sport.

The fastest badminton shots have been measured at over 300km/h and in doubles matches the shuttlecock – a conical object made of cork and either duck or goose feathers – is hit back and forth over the net, racket to racket, on an average of once every 0.8 seconds. But it can also be hit softly and float agonisingly slowly through the air. Between these two extremes, there are a greater variety of speeds and trajectories than in any other racket sport. The result is a game with constant changes of pace and constant movement.

Like so many international sports, the rules of badminton were formalised in 19th century England, but the original games it is based on had been widely popular activities all over the world for thousands of years. This helps explain how badminton can claim to be the second most popular participation sport in the world, with over 220 million regular players and 188 countries in the Badminton World Federation.

In recent years, Carolina Marín, from Huelva and twice world champion, has contributed to changing the image of the game in Spain with her feisty challenge to the traditional dominance of Asian players. But there is still a long way to go in a country where tennis, pádel and all the different frontón sports are king.

The reason I’m playing badminton again after over a decade is Mikel, a student with ECP at Goros S.Coop. He persuaded me that I was still young enough to play (48) and invited me to train with his club in Lakua. As I’d missed not playing, and needed to do exercise, I accepted.

I asked him why he enjoys this often misunderstood sport. “The court is smaller than a fronton so the distances you run are shorter and, as the racket is much lighter, you use your wrist much more than in pala or frontenis, games that rely more on the strength of your arms,” he explained. “In badminton you need really quick reflexes and a lot of flexibility. The way the shuttlecock flies through the air is so different to a normal ball, and the fact that it can’t bounce means that you have to approach the game in a completely different way. I also like the fact that it is played indoors which means that you can play all year round without worrying about the weather.”

I’m loving being back on the courts despite the inevitable aches and pains. I’m running, jumping, stretching and diving while burning around 450 calories per hour. And there’s nothing better than winning a point with a high-speed smash that your opponent doesn’t even see. Is it time for you to give the world’s fastest racket sport a chance?